2:05pm: The deal guarantees Encarnacion $29MM, including a $2MM buyout for the $10MM club option in 2016, Ken Rosenthal of FOX Sports tweets. Encarnacion will earn annual salaries of $8MM, $9MM and $10MM.

10:17am: Edwin Encarnacion has been traded, claimed, non-tendered and designated for assignment in the last three years. His next three years figure to be considerably more peaceful. The Blue Jays announced that they signed Encarnacion to a three-year, $27MM contract extension. The deal covers the 2013-15 seasons and includes a $10MM club option for 2016. 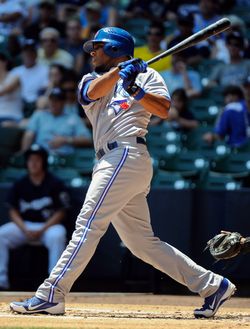 Encarnacion, 29, was on track to hit free agency this coming offseason. The Wasserman Media Group client has enjoyed a breakout season so far in 2012, with 23 home runs and a .295/.382/.565 batting line through 356 plate appearances. Encarnacion has career batting line of .264/.341/.465 in eight seasons with the Blue Jays and Reds.

Encarnacion is known for his power, not his defense, but he has successfully transitioned to first base this year. He has split his time between first base and DH in 2012, and figures to continue in that role for the duration of his extension.