The Angels have acquired Tommy Hanson from the Braves, reports Jon Heyman of CBSSports.com (on Twitter). Atlanta will receive Jordan Walden in the one-for-one trade, MLBTR has learned. The teams have confirmed the trade. 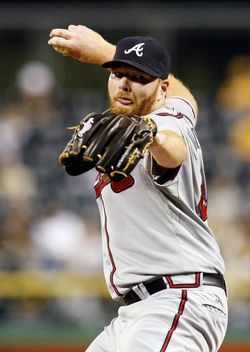 Hanson, 26, pitched to a 4.48 ERA with 8.3 K/9 and 3.7 BB/9 in 174 2/3 innings this year. The right-hander missed time with shoulder tendinitis last season, and his fastball velocity has been trending in the wrong direction as well. Hanson is arbitration-eligible for the first time this winter, and Matt Swartz projects a $4MM salary. He will remain under team control through 2015.

The Angels are in the market for starting pitching this offseason after trading Ervin Santana and declining Dan Haren's option. Zack Greinke is a free agent as well, though he is in very high demand. Hanson gives the club a young arm to fill out the rotation behind Jered Weaver and C.J. Wilson. Walden, meanwhile, gives the Braves bullpen depth and a power right-handed setup man in front of closer Craig Kimbrel.