Jason Marquis will be returning to the west coast to pitch for the team that took a flier on him last summer. The Padres have agreed to sign Marquis to a one-year contract, the team announced today in a press release. The ACES client will reportedly earn a $3MM salary for 2013. 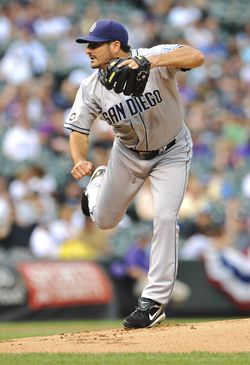 The one-year, $3MM deal appears identical to the one Marquis signed a year ago with the Twins. Landing a similar contract this winter initially appeared to be a long shot when the right-hander recorded an 8.47 ERA in seven starts with Minnesota and was designated for assignment. However, a strong second half with the Padres brought Marquis' overall numbers back to respectability. The 34-year-old posted a 4.04 ERA over the course of 15 starts with San Diego.

Marquis, who figures to slot in behind Edinson Volquez and Clayton Richard in San Diego's rotation, will be looking to pitch a full season for the first time since 2009. Although he averaged 196 innings from 2004 to 2009, Marquis hasn't topped 132 IP in any of the last three years.

Jon Heyman of CBS Sports (via Twitter) first reported the agreement. ESPN.com's Jayson Stark was the first to report that the two sides were closing in on a deal. Photo courtesy of U.S. Presswire.