The Rockies added a late-inning reliever today, acquiring Wilton Lopez and a player to be named later or cash from the Astros for starter Alex White and minor leaguer Alex Gillingham, the teams announced. 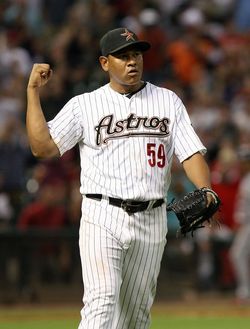 Lopez, 29, very nearly joined the Phillies last month before they called the trade off, perhaps over health concerns.  The Rockies are comfortable with Lopez's health, explained director of baseball operations Bill Geivett to Troy E. Renck of the Denver Post. The arbitration eligible righty posted a 2.17 ERA, 7.3 K/9, 1.1 BB/9, 0.54 HR/9, and 55% groundball rate in 66 1/3 innings this year and was projected to close for the Astros in 2013.  Lopez will be under the Rockies' control through 2015; he joins Rafael Betancourt, Rex Brothers, and Matt Belisle at the back end of Colorado's bullpen.