The Rays have acquired a new shortstop, getting Yunel Escobar from the Marlins for middle infield prospect Derek Dietrich today, according to Marc Topkin of the Tampa Bay Times. 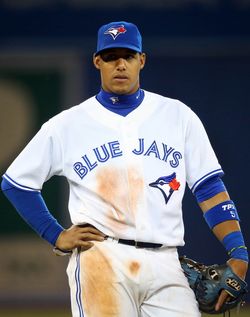 Escobar, a 30-year-old Cuban, hit .253/.300/.344 in 608 plate appearances for the Blue Jays this year.  In September, he was suspended for three games by the Blue Jays after displaying an "unacceptable message" on his eye black.  He was shipped to the Marlins as part of the November Jose Reyes–Josh Johnson–Mark Buehrle blockbuster, and the Rays appear to be buying low as they often do.  Escobar is owed $5MM in 2013 and has $5MM club options for each of the following seasons, on a deal signed in June of 2011.  His ability to play an acceptable shortstop generally makes him worth a couple of wins.  The Athletics, Yankees, and Cubs had also reportedly shown interest.

The Rays had a need at the position after using Elliot Johnson, Ben Zobrist, and Sean Rodriguez there in 2012.  The Marlins prefer to use Adeiny Hechavarria as their shortstop after acquiring from Toronto in the same blockbuster deal. With the trade, Ricky Nolasco becomes the only Marlin earning more than $1.75MM in 2013.

Dietrich, 23, hit .279/.338/.457 in 563 plate appearances across High-A and Double-A this year, playing shortstop and second base.  The Rays drafted him in the second round in 2010.  Baseball America sees him as a second or third baseman long-term, and given above-average power, suggested prior to the season he had a chance at becoming an above-average big league regular.