The Indians announced that they've signed free agent outfielder Nick Swisher to a four-year contract. The agreement covers the 2013-16 seasons and includes a vesting option for 2017.

Swisher, an MVP Sports Group client, will earn at least $56MM before the contract expires. The $14MM vesting option in year five could boost the deal's overall value to $70MM. He'll make $11MM in 2013, $15MM for each of the 2014-16 seasons, and his $14MM 2017 option will vest if he has 550 plate appearances and passes his physical at the end of the 2016 season, reports Paul Hoynes of the Cleveland Plain Dealer (Twitter links). 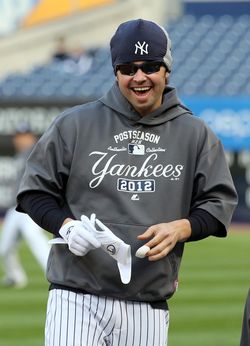 The veteran comes to Cleveland as the club's replacement in right field for Shin-Soo Choo.  The Tribe sent Choo to the Reds earlier this winter in a three-team deal that netted them right-handed pitchers Trevor Bauer, Matt Albers, Bryan Shaw, and center fielder Drew Stubbs.  The signing also means that Yankees will receive a compensatory draft pick as they extended the one-year, $13.3MM qualifying offer to Swisher earlier this offseason.

Swisher was said to have a four-year, $52MM offer on the table from Cleveland, but he ultimately got a little more out of General Manager Chris Antonetti & Co.  The switch-hitting outfielder reportedly preferred to play for the Dodgers, Angels, or Yankees, but he wasn't a fit for any of those teams given their outfield situations.  The Yankees also didn't seem to have much interest in working out a new deal with Swisher once he declined their qualifying offer.

One source indicated to Buster Olney of ESPN.com (on Twitter) that the Red Sox were interested in signing Swisher but didn't want to give up their high second round pick to the Yankees.  It's possible that the draft pick compensation tied to Swisher hurt his value as he looked for a deal on the open market. Swisher ranked sixth on MLBTR's top 50 list of free agents this offseason.

Mark Feinsand of the New York Daily News first reported the agreement and its value (via Twitter). Photo courtesy of USA Today Sports Images. Ben Nicholson-Smith contributed to this post.