FEBRUARY 10th: Myers' 2014 option vests if he pitches 200 innings this year and passes a physical at season's end, tweets Jordan Bastian of MLB.com.

JANUARY 4th: The Indians have agreed to sign right-hander Brett Myers to a one-year, $7MM deal with a club option. Myers, an LSW Baseball client, passed his physical, Paul Hoynes of the Cleveland Plain Dealer reports (on Twitter). Myers' 2014 option is valued at $8MM, MLB.com's Jordan Bastian reports (on Twitter). 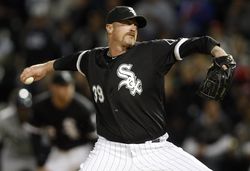 Myers, 32, pitched to a 3.31 ERA with 5.6 K/9 and 2.1 BB/9 in 70 relief appearances last season for the Astros and White Sox.  However, he has been vocal about his desire to be a starting pitcher once again in 2013.  The Tribe will plug Myers into the starting five, according to Hoynes (on Twitter).

Myers became a free agent in October when the White Sox declined his $10MM option for the 2013 season, opting instead to pay him a $3MM buyout.  The right-hander had interest from a number of clubs this offseason, including the Padres, Twins, and Royals.