10:52pm: If Liriano's option year vests at $5MM or $6MM, he can earn the difference between that and the full $8MM based on games started in 2014, Jon Heyman of CBSSports.com tweets.

10:13pm: The Pirates confirmed the signing via press release.  Liriano will be guaranteed just $1MM in 2013 and can earn up to $4.75MM through incentives in 2013 based on time spent on the DL due to his right arm injury, a source tells Bill Brink of the Pittsburgh Post-Gazette (on Twitter).  The left-hander can still make the original $12.75MM, however, if he stays healthy and has his option vest at $8MM (Twitter link).  That option's value could be worth just $5MM or $6MM based on missed time.

12:27pm: Long after initially agreeing to terms, the Pirates have finalized their two-year agreement with free agent left-hander Francisco Liriano. Liriano passed his physical and his deal with the Pirates is now official, Ken Rosenthal of FOX Sports reports (on Twitter).

The deal now includes language that protects the Pirates in case Liriano misses time due to an injury to his non-throwing arm, Rosenthal reports. Liriano will still earn $12.75MM if he misses no time due to the right arm injury, but his 2013 salary would be reduced if he does miss time because of the injury, which occurred last month. 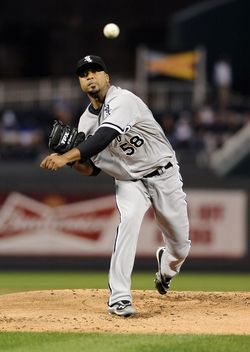 However, as a hard-throwing 29-year-old left-hander (his fastball averaged 93 mph in 2012) with a history of success at the MLB level, Liriano was definitely going to draw interest as a free agent. The Mets and Twins were also linked to him this offseason.

Liriano joins A.J. Burnett, Wandy Rodriguez and James McDonald in Pittsburgh's rotation. It's unclear whether GM Neal Huntington will continue seeking pitching depth at this stage in the offseason.