The Blue Jays have agreed to extend recently-named fifth starter J.A. Happ, reports Gregor Chisholm of MLB.com on Twitter. Happ will receive $5.2MM for 2014, his final arbitration-eligible year, in addition to the $3.7MM he was already owed for this season. Chisholm also tweets that the Jays obtained an option for the 2015 season at $6.7MM. 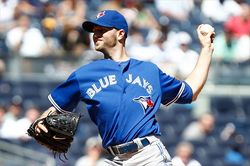 It has been a quick change of events for Happ, a client of Jay Fee Sports Group. Not long ago, he was reportedly the "odd man out" and unhappy with the prospect of a bullpen role or trip to the minors. Now, with Toronto's decision to keep Ricky Romero off of the Opening Day roster, Happ finds himself with both a rotation spot and a new deal.

Interestingly, MLBTR's Extension Tracker reveals no recent starters who agreed to an extension with the structure of Happ's deal. Happ, who has over four years of MLB service time, gave up control over his first season of free agent eligibility in exchange for guaranteed money in his final year of arbitration.

In sum and substance, in return for locking in $5.2MM in new money for 2014, Happ has given up a chance at a larger payday down the line. This offseason, comparable starters like Jeremy Guthrie (three years, $25MM) and Joe Blanton (two years, $15MM) managed to land multi-year deals with better annual value than Happ would be looking at if Toronto exercises his option. While Guthrie and Blanton have longer track records of logging 190+ inning seasons, Happ is younger than both and appears to have an opportunity to showcase himself over the next two seasons.