10:52am: Craig obtains a $31MM guarantee, Derrick Goold of the St. Louis Post-Dispatch reports (on Twitter).

9:41am: The Cardinals announced that they agreed to a five-year extension with first baseman/outfielder Allen Craig (Twitter link). The deal runs through the 2017 season and includes a club option for 2018. ACES represents Craig. 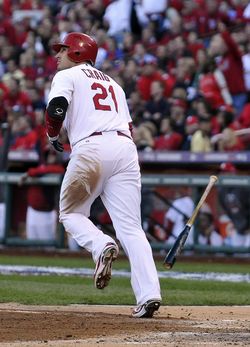 Craig, 28, is now entering his final season as a pre-arbitration eligible player. The contract covers his final pre-arb year, his three arbitration seasons, and at least one free agent year. The club option gives the Cardinals the chance to retain Craig for a second free agent year.

Craig got plenty of playing time as a first baseman and corner outfielder in 2012, and he responded with a tremendous season that earned him some recognition on NL MVP ballots. In 514 plate appearances, the right-handed hitter posted a .307/.354/.522 batting line with 22 home runs. Craig also impressed in 2011, when he posted a .917 OPS in 219 plate appearances.

While terms of the deal aren't known, it won't be surprising if it's worth $30MM or so. Many others have signed long-term deals covering the same seasons as Craig's deal, as MLBTR's Extension Tracker shows. When Andrew McCutchen, Justin Upton, Jay Bruce, Cameron Maybin and Curtis Granderson signed long-term deals, this five-year period was valued in the $25-36MM range (some of those players signed six-year deals).