The Braves crafted a dynamic outfield by acquiring the Upton brothers, but were weakened at third base in the process. 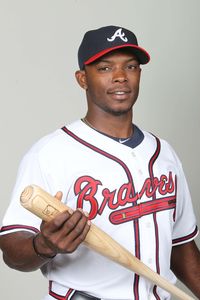 The Braves set out to secure two outfielders this offseason, and they wound up with an impressive combination in the Upton brothers.  Justin (pictured) is 25 and B.J. is 28, so both players are in the prime of their careers.  Justin, the first overall draft pick in 2005, has seemed on the cusp of superstardom for years.  He put up big seasons in 2009 and '11, but showed disappointing power in '10 and '12.  Diamondbacks GM Kevin Towers publicly acknowledged entertaining trades for Justin for the second consecutive offseason, and finally pulled the trigger this time.  It had to have weighed on the player's mind.  Getting out of Arizona should be a big win for him, and playing alongside his brother is the icing on the cake.  B.J., drafted second overall in '02, has had a very good Major League career.  He's prone to the strikeout, and the subsequent low batting averages suppress his OBP.  He's also a 25-30 home run player with strong center field defense.  If he finds a way to cut down on the strikeouts, he too could unlock superstar potential.

The Upton brothers both bat right-handed, complementing left-handed bats like Brian McCann, Freddie Freeman, and Jason Heyward.  In Freeman, Heyward, Andrelton Simmons, and the Uptons, the Braves have secured a strong core of position players for at least the next three seasons.

The Braves' bullpen posted a 2.76 ERA and 3.06 K/BB ratio last year, so it was hardly considered a big need going into the offseason.  Nonetheless, the swap of Hanson for Walden adds four years of control of another hard-throwing, intriguing reliever.  With their bullpen, the Braves could shorten a lot of games.  Plus, they've got depth in the event of an injury.  Braves GM Frank Wren also aimed to secure quality backups at catcher and outfield, and the signings of Laird and Johnson fit the bill.

For all the excitement of acquiring the Upton brothers, is this team better in 2013?  Prado had been slated to replace Jones at third base, and the Braves had to include him to acquire Justin Upton from Arizona.  With Prado traded, Bourn departed for the Indians, and Jones retired, the Braves lost a third of their 2012 offense.  Accounting for defense, swapping Bourn for B.J. Upton might be a wash in '13.  And while Justin Upton has the higher ceiling, he and Prado could provide comparable value this year as well.  Chris Johnson and Juan Francisco will man the hot corner, after Jones and Francisco took the bulk of the at-bats there in 2012.  Johnson, the right-handed side of that platoon, actually hasn't hit lefties well in his career.  The market for third basemen was weak this offseason, so Wren will have to be on the lookout this summer if the Johnson/Francisco plan isn't working.  The team also needs a strong April return from McCann following shoulder surgery; he's entering a contract year.

After exercising club options on Hudson and Maholm, the Braves felt they had the rotation depth to deal Hanson and Delgado and cut Jurrjens loose.  None of the departed starters were anything special in 2012, nor were they workhorses.  Still, the team enters 2013 with no pitchers who reached 190 innings last year, a feat accomplished by 28 hurlers in the NL.  Brandon Beachy should return from Tommy John surgery by July to give the rotation a boost.

Though the Justin Upton trade is not a clear win for 2013 because of the loss of Prado, the latter had only one year of control remaining at the time of the deal.  Upton has three, and he's still on the upswing.  Delgado, considered among the top 50 prospects in the game a year ago, needs to develop into at least a mid-rotation starter for Arizona to prevent this deal from heavily favoring the Braves.  It was a trade Wren had to make.  No one would be surprised if Justin Upton becomes a perennial MVP candidate in his age 25-27 seasons.

Hindsight being 20/20, the loss of the 28th overall draft pick and a five-year, $75.25MM deal for B.J. Upton was a fairly steep price for someone with a .298 OBP last year.  That's only true because Bourn and Swisher signed with the Indians for less than expected — Upton's contract seemed fair when it was completed in November.  Plus, Upton is the youngest of those three by a long shot, and competition seemed stiffer for his services at the outset of the offseason.

The Braves should contend for the next several seasons, with a strong core of position players, good young arms in the rotation and bullpen, and a pair of top 100 pitching prospects in Julio Teheran and J.R. Graham.  The Braves may not quite stack up with the Nationals on paper, but they're better off now than they were four months ago.