The Rays have announced they will promote Wil Myers on Tuesday and he will join the team in Boston. Adam Berry of MLB.com first tweeted the news of the call up. The Rays will clear a spot on the 25-man roster by optioning Ryan Roberts to Triple-A Durham, but a corresponding 40-man roster move is not necessary since they had one opening. 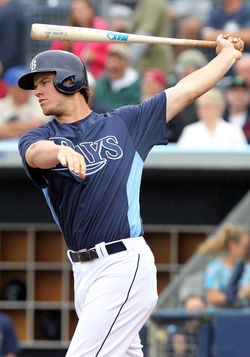 Rays' Executive VP of Baseball Operations Andrew Friedman told reporters, including Joe Smith of the Tampa Bay Times (Twitter link), Myers is "going to fit right in and help us win games." Friedman says Myers' recent hot streak (hitting .354 with ten home runs, and 32 RBI's in his last 32 games) "accelerated the conversation" about being promoted and what stood out to him was how well the 22-year-old has improved defensively. (Twitter links)

Myers will play regularly, mostly in right field, according to Friedman. Manager Joe Maddon concurred with his boss, as quoted by Smith, "He's going to play a lot. Of course you don't bring somebody like that up to sit around."

Myers is the consensus choice as the game's fourth-best prospect as ranked by ESPN's Keith Law (Insider subscription required), Baseball America, and MLB.com. Law evaluates Myers as "a patient hitter who needs to work on bat control and might struggle to hit for average at first, producing via walks and power, with an eventual ceiling as a high-average, high-power player." Prior to the season, Baseball America wrote "Myers combines outstanding raw power with an advanced approach at the plate and excellent hand-eye coordination" and fits best defensively in right field. MLB.com says Myers "profiles as a run-producer in the middle of any big league lineup and he can drive the ball to all fields with the ability to leave the yard consistently."

Myers, hitting .286/.356/.520 in 289 plate appearances at Triple-A Durham after being removed prior to the third inning of the Bulls' game this afternoon, was the centerpiece of the James Shields–Wade Davis trade the Rays made with the Royals last December. The 2009 third-round draft pick will accrue 104 days of service time, if he remains with the Rays for the rest of the season, and is on the cusp of missing Super Two status based on the current projection. Nevertheless, the Rays will control Myers through the 2019 season.