Baseball America's Jim Callis reports (via Twitter) that the Yankees and first-round pick Eric Jagielo have agreed to terms on $1,839,400 signing bonus — the exact amount of the assigned pick value for the No. 26 overall selection. Jagielo is advised by Frontline. 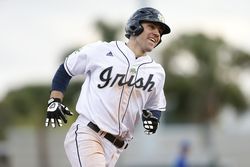 Jagielo, a third baseman from Notre Dame, ranked 16th on Baseball America's list of Top 500 draft prospects. ESPN's Keith Law ranked the slugger 26th among potential draftees, and MLB.com's Jonathan Mayo had him at No. 37 on his Top 100 list. BA projects him to hit for both power and average, noting that he has improved his plate discipline in 2013.