The Marlins have announced that they will select the contracts of top outfield prospects Christian Yelich and Jake Marisnick tomorrow and demote Derek Dietrich and Marcell Ozuna to Double-A Jacksonville. 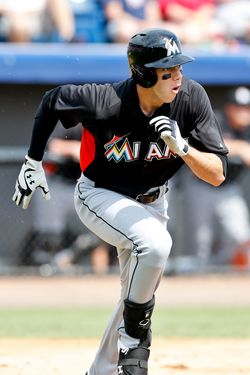 The 21-year-old Yelich (pictured) ranked as the No. 6 prospect in baseball according to ESPN's Keith Law prior to the season, though he dropped to 12th on the midseason edition of his Top 50. Baseball America ranked him 12th on their own midseason Top 50, and MLB.com's Jonathan Mayo ranks him 10th. Yelich was drafted 23rd overall in the 2010 draft out of Westlake High School in California. In 60 games across three levels this season, Yelich has hit .274/.358/.504 with nine home runs, splitting his time between center field and left field. In his pre-season report, Law wrote that Yelich possesses one of the prettiest swings in the minors and has the range to play center, but his throwing motion makes him better-suited for left field.

Marisnick, 22, came to the Marlins as part of this offseason's blockbuster trade with the Blue Jays. He ranked as BA's No. 64 prospect prior to the season, with Mayo ranking him 70th and Law ranking him 82nd. His strong season thus far propelled him to No. 39 on Law's midseason Top 50. In 296 plate appearances for Jacksonville, Marisnick is batting .295/.357/.504 — an oddly similar batting line to that of his teammate Yelich. BA wrote that while there are questions about Marisnick's ability to make contact due to a large frame and sometimes long swing, he has the speed, plus power and above-average defense to project as a five-tool center fielder.

Because we are now well into July, both players should be clear of the Super Two cutoff, meaning they will only be eligible for arbitration three times if they are with the big league club to stay. Should that be the case, both will be controlled through the 2019 season.