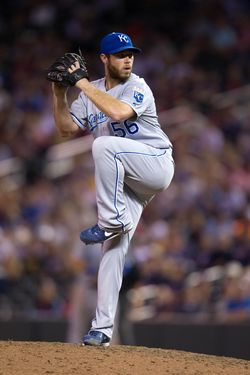 The league is full of young closers nowadays, and they all seem to be entering their first year of arbitration at the same time. There are seven different pitchers with at least 16 saves in 2013 who are entering arbitration for the first time, nearly a quarter of the entire league’s closers. Craig Kimbrel has already been discussed in a previous article and his case is far stronger than any of the other pitchers. Aroldis Chapman has a pretty unique case, if not a better one, because he has been an elite closer for two years and will be opting out of a large contract to go through arbitration. Mark Melancon is different than the others as well, because he only really was a closer in the second half of this season, and only due to injury. However, there are a number of similarities between Ernesto Frieri, Steve Cishek, Greg Holland, and Kenley Jansen, and this article will be about the cases for each of them. The model only sees arbitration salaries of $3.4MM for Frieri and $3.2MM for Cishek, while it sees $4.9MM for Holland and $4.8MM For Jansen. In this article, I will explain why the model is making these predictions and discuss whether the actual salaries will diverge this much.

Holland has the most platform year saves of the group, with 47 this past year, on top of the 20 pre-platform saves he had. This number along with his 1.21 ERA explains why he had the largest salary projection of this group at $4.9MM. Although Jansen had fewer saves than the others with 28, his 1.88 ERA was better than Cishek’s 2.33 and far better than Frieri’s 3.80 this past season. Combining that with his 2.22 ERA pre-platform (better than the other three) and his 16 holds, and Jansen is projected nearly as high as Holland, with a $4.8MM estimate. Jansen’s 34 pre-platform saves were also the highest of the four, and his 21 pre-platform holds stood only behind Holland’s 27.

Another potential comparable could be Chad Cordero, who received $4.15MM back in 2007. Although this is a stale number at this point, the 29 saves that Cordero had in his platform year are similar to Jansen’s 28, and even though his 62 pre-platform year saves beat Jansen, his 3.19 ERA and 69 strikeouts fall short of him. Furthmore, Jansen’s holds are really unique for a guy who has mostly been a closer and give him a small leg up on other names that keep coming up. In the end, something in the $4.8MM neighborhood could be a good bet, though I could see him ending up with less than this if platform year saves become too large of a factor.

Looking for comparables for Frieri is tricky if the high ERA comes into play. Even though he accumulated 37 saves in 2013, the 3.80 ERA that went along with them is abnormally high for a closer. In recent years, few such pitchers have met their criteria. Axford had a 4.68 ERA going into last year’s negotiations, which yielded him $5MM, but given that he had 71 pre-platform saves, that would dwarf Frieri’s 23, despite the similar number of saves during their platform years. Chad Cordero’s name might make some sense as well, when he earned $4.15MM in 2007, but his 62 pre-platform year saves are also too many to make for a good comparable and an ERA of 3.19 isn’t so bad either.

Another name that could come up in the negotiations over Frieri’s salary is Juan Carlos Oviedo, who had a 4.06 ERA in 2009. He only had 26 saves though and no pre-platform saves. These factors got him only a $2MM salary, which probably is way below what Frieri will receive. Brian Wilson keeps coming up as a ceiling for Frieri. He had 38 platfrom year saves and 48 pre-platfrom year saves, so he has Frieri on the pre-platform year saves, and his 2.74 ERA is much better as well. His $4.46MM salary will almost definitely exceed Frieri’s.

It’s hard to pick anyone who makes sense in between these numbers so really anywhere from $2MM to 4.4MM seems possible for Frieri. Of course, I suspect he’ll be somewhere in the middle of these two extremes, so I think that the $3.4MM projection is about right.

Cishek had 34 saves last year, but with only 18 pre-platform saves, he probably has a weaker case than these other closers. Pre-platform year saves matter a lot for first-time eligible closers, so looking for his comparables will entail limiting this. Akinori Otsuka seems to line up in some ways, but his projection is very stale. Back in 2007, he earned $3MM after recording 32 saves and a 2.11 ERA, but he only had 3 saves prior to his platform year. Since Cishek’s ERA was 2.33, it could be that $3MM becomes a floor for Cishek. On the other hand, David Aardsma received $2.75MM in 2010 after recording 38 saves, but those were the first of his career. Given his 18 career holds are similar to Cishek’s 16, and his 2.52 ERA is also near Cishek’s, I could see the Marlins trying to hold down Cishek’s salary by suggesting this comparable.

Of course, if Cishek can downplay the importance of pre-platform saves, he may be able to sneak Brian Wilson’s $4.46MM salary into the argument. Wilson had 38 platform year saves, which is similar to Cishek’s 34, and his 2.74 ERA was higher than Cishek’s 2.33. However, I suspect the 48 pre-platform saves will make it hard to make this argument. Cishek coming in near $3.2MM as he is projected, just above Otsuka’s $3MM and Aardma’s $2.75MM seems likely.

Overall, despite the uncertainty and the difficulties in finding perfect comparables, it seems like the model is probably about right on all four of these guys. Although they each may be used as comparables for each other if one or two sign earlier than the others, drawing their salaries closer together based on the similarities between their platform year and pre-platform year saves, I suspect that the large gap in ERA and strikeouts ends up pushing them further apart, as well as Holland’s standout headline of 47 saves.