The Angels and Cardinals have officially announced a trade that will send center fielder Peter Bourjos and outfield prospect Randal Grichuk to the Cardinals in exchange for third baseman David Freese and right-hander Fernando Salas. 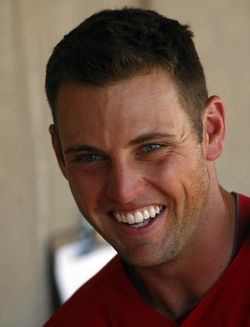 Freese, 30, had a down season at the plate in 2013, slashing .262/.340/.381 with just nine homers. He was significantly better in 2012, when he belted 20 homers and batted .293/.372/.467 in 144 games. Freese is typically regarded as a solid defender at third base, but both The Fielding Bible and Ultimate Zone Rating graded his work poorly this season. Freese began the season on the DL with a back strain, and if that pain lingered throughout the season, it could explain his decline on both sides of the game. Swartz projects Freese to earn $4.4MM in 2014.

Grichuk, 22, was just added to the Halos' 40-man roster this week to protect him from the Rule 5 Draft. The Angels selected Grichuk 24th overall in the 2009 draft — their first of two consecutive picks. The second pick netted superstar Mike Trout. He ranks as Anaheim' No. 4 prospect, per MLB.com's Jonathan Mayo, who calls Grichuk "a solid defensive outfielder with a strong arm and still has the chance to be a good run-producing corner outfielder," noting that he's overcome injury issues that plagued him early in his career. Grichuk entered the season as the Angels' No. 6 prospect, per Baseball America, and BA's JJ Cooper tweets that he'd likely have ranked second on the upcoming 2014 version of the list. He's more likely to rank 10th on the Cardinals' list, adds Cooper.

The Angels had a clear need at third base after trading Alberto Callaspo to the A's last July, and the Cardinals were in the market for a defensive upgrade from Jon Jay, whose center field defense has graded out as a negative over the course of his career. In that sense, the two sides line up well for a trade, though Freese comes with just two years of team control compared to Bourjos' three.

All told, the Angels are dealing three years of Bourjos and one of their top prospects for two years of Freese and three years of Salas in addition to agreeing to take on roughly $4MM in additional salary in the 2014 season.

Ken Rosenthal of FOX Sports first reported that Bourjos was headed to the Cardinals (on Twitter). MLB.com's Alden Gonzalez confirmed that the Angels would receive Freese in return. Yahoo's Tim Brown reported (via Twitter) that other players were involved, and the Angels would get Salas in the deal (Twitter link). Jeff Fletcher of the Orange County Register was the first to report Grichuk's involvement (on Twitter).