The Braves added depth to their rotation today, officially announcing the signing of righty Gavin Floyd to a one-year deal.  ESPN's Jerry Crasnick reports that Floyd will earn a $4MM base salary and can earn another $4.5MM with incentives. Floyd is represented by Moye Sports Associates. 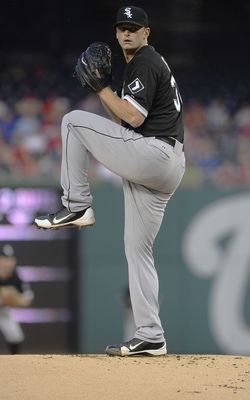 Floyd, who turns 31 in roughly six weeks, posted a 5.18 ERA in 24 1/3 innings for the White Sox last season before going down for the year with a torn ulnar collateral ligament that required Tommy John surgery. Prior to that injury-shortened season, the former No. 4 overall pick had been a fairly durable mid-rotation starter for the White Sox, averaging 190 innings of 4.12 ERA ball with 7.2 K/9 and 2.8 BB/9 per season from 2008-12 in the hitter-friendly confines of U.S. Cellular Field.

The contract is similar to the deal that Mike Pelfrey signed with the Twins headed into the 2013 season. Pelfrey had Tommy John surgery on May 1, 2012 and signed for $4MM plus another $1.5MM worth of incentives. Floyd's Tommy John came on May 8, 2013, and he hopes to be throwing in the Majors by early May, according to Crasnick.

Floyd will eventually join a rotation that should consist of Mike Minor, Kris Medlen, Brandon Beachy and Julio Teheran as well. Left-hander Alex Wood could fill the void early in the season as Floyd works his way back from injury. It's also no guarantee that Floyd will be able to return so early. Though many Tommy John victims are able to make their recovery in a year's time, Scott Baker and Ryan Madson both serve as very recent reminders that the recovery process can be filled with significant setbacks.

Eduardo A. Encina of the Baltimore Sun first reported (on Twitter) that Floyd was near a deal with an unknown club, and David O'Brien of the Atlanta Journal-Constitution first reported that the Braves were the team (also via Twitter).  Jon Heyman of CBS Sports first reported an agreement had been reached.