The Diamondbacks have agreed to an extension with right-hander Brad Ziegler, the pitcher himself announced on Twitter. Ken Rosenthal of FOX Sports tweets that it's a two-year, $10.5MM contract with a club option for a third-year. Rosenthal reports that Ziegler's deal will pay him $4.5MM in 2014 and $5MM in 2015, and his $5.5MM option contains a $1MM buyout. He is a client of Icon Sports Management. 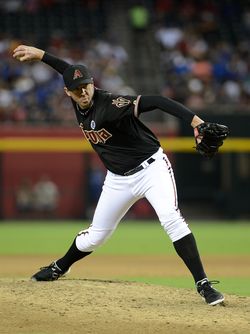 Ziegler, 34, is coming off a season in which he posted a 2.22 ERA and filled in as Arizona's closer, saving 13 games and falling one out short of matching his career-high of 73 1/3 innings. He was originally acquired by the Diamondbacks in July 2011 in what looks to be a lopsided deal in hindsight. Arizona sent Brandon Allen and Jordan Norberto to Oakland to land the side-armer. Ziegler has rewarded GM Kevin Towers with 162 1/3 innings of 2.27 ERA ball with 5.6 K/9, 2.7 BB/9 and a ground-ball rate north of 70 percent.

Dating back to 2002 when batted ball data began being tracked, Ziegler's 66.1 percent ground-ball rate is the highest among all Major League pitchers with at least 300 innings pitched.

MLBTR's Matt Swartz projected Ziegler to earn $5MM in his final year of arbitration eligiblity, so he likely took a slight hit to his 2014 salary in exchange for multiple years in an environment that he enjoys. Towers has shuffled his bullpen this offseason by acquiring Addison Reed from the White Sox in exchange for Matt Davidson and trading Heath Bell to Tampa Bay in a three-team deal. Ziegler, Reed and J.J. Putz should form a solid core to handle the late innings for manager Kirk Gibson.

Initial reports that an extension with Ziegler was a possibility surfaced in September. Later that same month, he told reporters that it didn't matter to him whether he pitched in the eighth or ninth inning. With Reed and Putz both on board, Ziegler seems likely to return to the setup role in which he has thrived for most of his career.