Veteran reliever Brad Ziegler has announced his retirement from the game of baseball (Twitter link). The submariner, who chose the occasion of his 39th birthday to spread the news, has appeared in 11 MLB seasons and compiled over seven hundred innings on the hill. 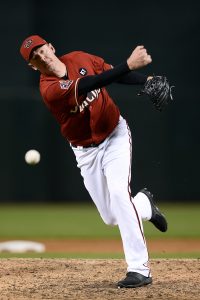 It has certainly been quite a run for a player who got his start as a 20th-round draft pick and did not touch the majors until his age-28 season. As Ziegler himself notes in his announcement, his outlook was dubious at best when he was transformed from a marginal starting pitching prospect into a drop-down reliever.

As it turns out, Ziegler has led all relievers in baseball in innings pitched and appearances since making his debut in 2008. Despite working in the mid-eighties with his signature sinker, Ziegler befuddled MLB hitters all along the way.

It didn’t take long for Ziegler to announce his presence once he finally did debut. He spun a record-setting 39 scoreless frames for the Athletics in his rookie campaign.

Inevitably, the league adjusted somewhat. And Ziegler was always somewhat limited by his lack of swing-and-miss stuff. But he proceeded to reel off an amazing span of productive campaigns in Oakland and then (after a mid-2011 trade) with the Diamondbacks. From 2008 through 2016, Ziegler tossed nearly six hundred frames while maintaining a 2.44 ERA and picking up 85 saves.

The end of that stretch of excellence, of course, did not come with either of those organizations. Ziegler was shipped from Arizona to the Red Sox at the 2016 trade deadline, leading to a quality run down the stretch in Boston.

Ziegler ended up carrying that momentum into free agency, landing a two-year, $16MM deal from the Marlins. Things didn’t go as hoped, but Ziegler did figure out a way to turn things around in 2018. He threw well enough in the run-up to the deadline that he landed back in Arizona to finish out his career.

Ultimately, Ziegler will be remembered for being a highly-respected, consistent, and exceedingly durable reliever. He led all of baseball, in fact, with 82 appearances in his final campaign. Ziegler also notably tallied more than one hundred career saves.

Above all else, though, his absurd 66.7% career groundball rate sets a mark that future hurlers of his ilk will be measured by. That stands as a record for the modern era in which such statistics are available. (You can safely ignore the first name on that list, as it’s based only on a one-appearance sample in 2002, the first year that GB% is computed.)

It is not yet known what Ziegler will pursue next, but the long-time player’s union representative will surely have his choice of opportunities in and around the game of baseball. MLBTR congratulates him on an excellent career and wishes him the best of luck in his future endeavors. (For the record, this offer still stands!) 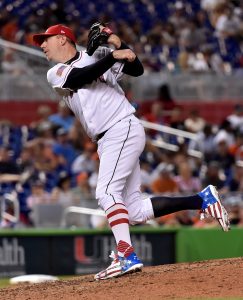 It’s a buyers’ market for bullpen help with just over two hours until the non-waiver trade deadline, as there’s a significant supply of arms thought to be available on the market. Here’s some of the latest chatter as contenders look to bolster their relief corps:

Though an MLB.com report of a near agreement on a Brad Ziegler trade between the Cubs and Marlins was ultimately retracted, there’s still plenty of chatter on the veteran submariner, who looks quite likely to change hands today. Ziegler is owed about $2.95MM of his $9MM salary through the end of the season and has pitched to a brilliant 0.93 ERA with 22 strikeouts, 11 walks and a superlative 80.3 percent ground-ball rate in 29 innings over the past two months. Here’s the latest chatter…

Having added Nate Eovaldi and Ian Kinsler in the last week, the Red Sox could still acquire a reliever in advance of this afternoon’s trade deadline.  Expect an active day of reliever trades, even after a flurry yesterday that saw Keone Kela, Adam Warren, Zach Duke, and Roberto Osuna change teams.  The latest Red Sox bullpen rumors:

11:54pm: Morosi has now reversed his report, tweeting that a deal is in fact “not close.” He does note on Twitter that the Chicago organization remains involved in talks for Ziegler.

11:48pm: The Cubs are close to reaching agreement on a deal to bring veteran Marlins reliever Brad Ziegler to Wrigley, according to Jon Morosi of MLB.com (via Twitter). Details of the prospective arrangement remain unknown.

While the Chicago organization has already acted to bolster its relief unit, adding swingman Jesse Chavez, it obviously feels it could still stand to improve. The Cubs have been tied to a variety of names in recent weeks, including Ziegler.

With Brad Brach now on his way to Atlanta and Adam Jones seemingly unwilling to waive his 10-and-5 rights at present, the Orioles may turn to weighing offers on more controllable pieces, tweets Rob Biertempfel of The Athletic. Biertempfel suggests that the Pirates have been “chasing” right-hander Kevin Gausman and wonders if the club would try to expand talks to get the Orioles to somehow part with both Gausman and setup man Mychal Givens in what would then be a fairly substantial trade. There’s been no indication that the O’s are strongly considering moving either Gausman (controlled through 2020) or Dylan Bundy (2021) anyhow, and they’re reportedly loath to consider trades involving the controllable Givens, either. It’s not surprising to see the Bucs tied to affordable long-term pieces, though prying even one of those pieces, let alone two, would likely require a fairly substantial haul in return from Pittsburgh (or any other interested team).

Both the Braves and Cubs are making pushes for Orioles reliever Brad Brach, Roch Kubatko of MASNsports.com tweets. Brach, a pending free agent on a $5.165MM salary, looks like a shoo-in to move prior to Tuesday’s non-waiver deadline. The 32-year-old has endured an uncharacteristically mediocre season, however, with a 4.85 ERA/4.01 FIP and unexciting strikeout and walk rates (8.77 K/9, 4.38 BB/9) over 39 innings.

More rumors with the deadline nearing…

Following this past offseason’s fire sale of MLB assets, the Marlins are likely to ship out a few more players in the coming days prior to the non-waiver trade deadline. MLB.com’s Joe Frisaro has some updates on the market for a wide number of Miami assets as we approach July 31st.

The Marlins are drawing interest in relievers Kyle Barraclough, Drew Steckenrider, Adam Conley and Brad Ziegler, writes Joe Frisaro of MLB.com, but president of baseball operations Michael Hill acknowledges that he’s placed a lofty price on the former three, each of whom has at least three years of control beyond 2018. “You’re talking about trading one-pluses and two-pluses [years of service time],” says Hill. “If I call and I’m trying to acquire a one-plus, or two-plus, I know it’s going to be costly. Our game is about maximizing value, and control of players.” Hill adds that despite the Marlins’ rebuild — or “build” as the organization is terming it — his goal is to win as often as possible. The Indians, Astros, Red Sox and Dodgers have all been previously linked to Miami’s bullpen.

Furthermore, Frisaro notes that while teams will inquire about catcher J.T. Realmuto in the coming weeks, the asking price remain extremely high. Realmuto may even be approached about a contract extension this offseason, per Frisaro, though that may be a tough sell after the Fish shipped out the Marlins’ entire core last offseason.

More trade rumblings from around the league…