The Royals have acquired outfielder Norichika Aoki from the Brewers in exchange for left-hander Will Smith, the Brewers have announced via press release. The trade was first reported last night by the folks at the Royal Revival blog (on Twitter). 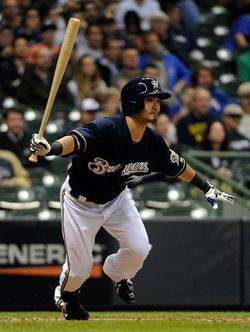 Aoki, 32 next month, enjoyed his second solid season with the Brewers since coming over from Japan. The lefty swinger batted .286/.356/.370 with eight homers and 20 stolen bases. Though his power numbers dipped in 2013, the former NPB batting champion has a solid .287/.355/.399 line in his two Major League seasons to go along with excellent right-field defense (+4.2 UZR/150; +21 DRS). He comes at a highly affordable rate also, as the Brewers exercised a cheap $1.9MM club option on Aoki following the season. He is a free agent following the 2014 campaign.

Aoki's acquisition would seem to call Kansas City's pursuit of Carlos Beltran into question. The Royals had reportedly been one of the front-runners to land Beltran (if not the front-runner), but unless they plan on shifting Aoki to center field, his presence in right field and Billy Butler's presence at DH make it more difficult to see Beltran fitting into the plans. However, Ken Rosenthal of FOX Sports reports (via Twitter) that the Royals still plan on pursuing Beltran even after acquiring Aoki.

Smith, 24, was shifted to the bullpen in 2013 and enjoyed an outstanding breakout campaign in a half-season's worth of big league action. Smith posted a 3.24 ERA with 11.6 K/9, 1.9 BB/9 and a 43 percent ground-ball rate in 33 1/3 innings for the Royals. His ERA would likely have been lower had it not been for a fluke 18.8 percent homer-to-flyball ratio that figures to regress going forward. xFIP, which assumes a normalized HR/FB ratio, pegged Smith at 2.50 last season. Smith held opposing right-handers to a .684 OPS and stifled lefties to the tune of a .157/.204/.353 line, so he's capable against hitters from both sides of the dish.

The Royals originally acquired Smith along with Sean O'Sullivan in a deal that sent Alberto Callaspo to the Angels. He's spent most of his career as a starting pitcher in the minors, where he has a 3.85 career ERA in 231 1/3 innings. Smith won't be eligible for arbitration until after the 2015 campaign and can be controlled through the 2019 season.