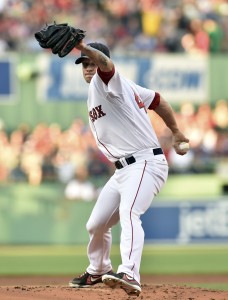 The trade reunites Peavy with Bruce Bochy, who managed him with the Padres. The deal also provides the Giants with valuable starting pitching depth, which they needed, given Matt Cain’s injury. The Red Sox, meanwhile, add prospect depth while clearing space for younger starting pitchers like Brandon Workman and Allen Webster.

Escobar and Hembree appear to constitute a strong return for Boston. The lefty Escobar, 22, has pitched the entire season with Triple-A Fresno, posting a 5.11 ERA with 7.8 K/9 and 3.0 BB/9. He had a very strong 2013 season at Class A+ and Double-A. MLB.com ranked him the Giants’ No. 2 prospect and the No. 75 prospect in all of baseball, noting that he could become a middle-of-the-rotation starter.

Hembree, 25, has spent most of the 2014 season with Fresno, where he’s posted a 3.89 ERA with 10.5 K/9 and 3.0 BB/9 in 39 1/3 innings of relief. He appeared in nine games in the big leagues in 2013. MLB.com ranked him the 11th-best prospect in the Giants’ system, noting that he has long been regarded as a potential closer. Both Escobar and Hembree were on the Giants’ 40-man roster, although the Red Sox had a 40-man spot open before the trade, so they didn’t need to make any further moves to add both.