10:25pm: The Tigers have announced the deal, making it official.

9:23pm: The Tigers have agreed to acquire reliever Joakim Soria from the Rangers in exchange for right-handed pitching prospects Jake Thompson and Corey Knebel, Kyle Bogenschutz of Scout.com was first to report on Twitter. Jon Morosi of FOX Sports confirmed that an agreement is in place (via Twitter). 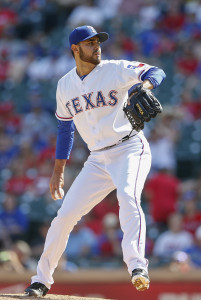 With the acquisition of Soria, the Tigers now possess both of the Rangers’ most recent closers (having signed Joe Nathan as a free agent over the offseason). It appears that Nathan will retain the closer’s mantle for the time being, but regardless the team will now have an additional premium arm to throw into high-leverage situations. At the moment, the team owns the fifth-worst relief ERA in baseball.

He is playing out the back end of the two-year, $8MM deal he signed to join the Rangers after Tommy John surgery led to the end of his tenure with the Royals. But Soria also comes with a seemingly reasonable $7MM club option. (That option would increase to $8MM if he finishes 55 games; he is sitting on 32 at present. The contract also includes performance bonuses.)

The return would appear to be substantial. Both Thompson and Knebel rated among Detroit’s ten best prospects coming into the year, per Baseball America, with the former landing at fourth and the latter at sixth on BA’s list. If anything, their stock has risen since that time.

Thompson, a 20-year-old starter, just earned a promotion to Double-A after posting a 3.14 ERA over 83 innings with 8.6 K/9 and 2.7 BB/9 at the High-A level. Baseball America says he has mid-rotation upside. He has a low-to-mid 90s fastball and promising slider, but profiles as a mid-rotation arm if he can develop a consistent third pitch from amongst his other offerings (curve and circle change).

The 22-year-old Knebel, meanwhile, has already made his big league debut after being selected 39th overall in last year’s draft. Though he surrendered six earned runs in 8 2/3 MLB frames, he also notched 11 strikeouts against just three walks and has dominated minor league hitters. He profiles as a potential future closer, says BA, though Detroit had weighed the possibility of trying him as a starter.

With Soria and Huston Street now taken, the relief market now lacks somewhat for obviously available closers. Jonathan Papelbon is surely available, but of course comes with a still-sizable contract. The Padres will presumably listen on Joaquin Benoit, but may want a large return to part with him after dealing Street. And it remains to be seen whether names like Koji Uehara and Steve Cishek could be had.