6:01pm: The Angels initially claimed Beckham off waivers, according to Alden Gonzalez of MLB.com (on Twitter).

5:07pm: Kay clarifies that the Angels will send a PTBNL or cash considerations to the White Sox in exchange for Beckham, not both, as he initially announced (Twitter link).

4:35pm: Angels director of communications Eric Kay announced today that the team has acquired second baseman Gordon Beckham from the White Sox in exchange for a player to be named later and cash considerations (Twitter link). The Angels can clear a 40-man roster spot for Beckham by placing the injured Garrett Richards on the 60-day disabled list. The team announced earlier today that Richards is out six to nine months due a torn patellar tendon in his left knee that will require surgery. 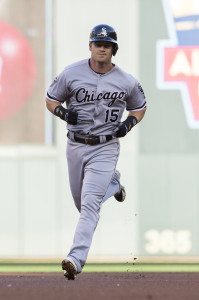 Park-adjusted metrics such as OPS+ (83) and wRC+ (82) suggest that Beckham has been about 17 to 18 percent worse than a league-average hitter over the course of his career, although the offensive bar for a middle infielder is considerably lower than that of a corner infielder/outfielder. While he’s hit lefties at a .309/.349/.454 clip in a small sample this season, his career split — .245/.313/.375 — is pretty even with his career mark against right-handed pitching.

Beckham will bring some degree defensive versatility to the Angels, and Jeff Fletcher of the O.C. Register tweets that he will come off the bench. Beckham has played primarily second base for the Pale Hose in his career, but he broke into the Majors primarily as a third baseman back in 2009 and was initially drafted as a shortstop out of the University of Georgia. Defensive metrics such as Ultimate Zone Rating and Defensive Runs Saved have pegged Beckham’s glove as roughly average over the past four seasons.

The Angels will have control of Beckham through the 2015 season if they wish, as he is arbitration eligible for the final time this offseason. Beckham’s agents at Relativity Sports avoided arbitration with the White Sox by securing a one-year, $4.18MM contract this winter. He is owed roughly $913K of that figure from now through season’s end. Despite the down performance in 2014, Beckham will be in line for a slight raise, making him a non-tender candidate following the season.

That Gordon reached the Angels means he either cleared waivers earlier this month or went unclaimed by every other team in the American League, as Anaheim currently possesses the best record in the Majors.