The Indians have agreed to a one-year, $1MM extension with righty Scott Atchison, the club announced via press release. According to Jordan Bastian of MLB.com (via Twitter), Atchison will earn $900K next season. The deal includes a $1MM club option for 2016, which comes with a $100K buyout. 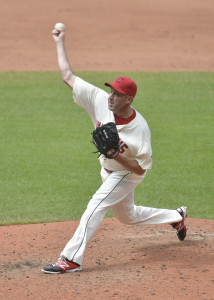 Atchison, 38, has produced very solid results this year out of the pen since signing with Cleveland on a minor league deal. He owns a 2.95 ERA with 6.1 K/9 against 1.5 BB/9, and has held opposing hitters to a paltry .218/.251/.342 line. The result is a surprisingly dominant 0.964 WHIP, the second time in three years that he’s been charged with less than one baserunner per inning. ERA estimators largely agree with the result, as Atchison has a 3.22 FIP, 3.17 xFIP, and 2.76 SIERA on the year. Remarkably, Atchison has run up his average fastball to a career-best 92.2 mph this season.

Despite his age, Atchison was set to qualify for arbitration next year for the final time after entering the season with just under five years of service time. Presumably, Cleveland was interested in cost certainty, and perhaps also sought something of a discount. (Coming off a less successful 2013, Atchison projected to earn $1.3MM through arbitration before being non-tendered.) For Atchison, the deal protects him from a late-season injury or potential non-tender situation. And the contract does extend team control by one season through the function of the option.

The deal is somewhat reminiscent of recent late-season, one-year extensions reached with veterans like Greg Dobbs (Marlins, 2013), Chad Tracy (Nationals, 2012), and Mark Kotsay (Padres, 2012). Several hurlers, too, have inked such deals, such as Tim Byrdak’s 2011 extension with the Mets and Livan Hernandez’s 2010 contract with the Nationals. Each of those guarantees came in under $1.5MM, though none contained an option year.