The Pirates have officially acquired righty John Axford from the Indians, the clubs have announced. Ken Rosenthal of FOX Sports first reported the transaction (via Twitter). Axford, 31, joined Cleveland on a one-year, $4.5MM free agent contract after being non-tendered by the Cardinals. 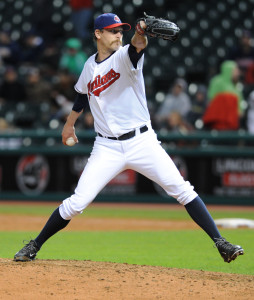 Pittsburgh added the righty through a straight waiver claim , tweets ESPN.com’s Buster Olney. That means the club will be on the hook for the approximately $1.1MM that he is still owed this year, though it will not need to part with any young talent to add the veteran arm.

On the year, Axford has posted a 3.92 ERA with 10.5 K/9 but a troubling 6.5 BB/9 over 43 2/3 innings. He does have a career-best 54.1% groundball rate, but advanced metrics have not been impressed on the whole (4.71 FIP, 3.98 xFIP, 3.80 SIERA). Axford opened the season as the Cleveland closer, and picking up ten saves in the process, but lost the job with inconsistent performance. He has been much better of late, though saw his ERA jump 78 points in his last outing (August 8th) when he gave up four earned runs on three hits and an ill-timed home run.

Axford has now been dealt in August for the second time in as many seasons. Last year, the one-time Brewers closer moved from Milwaukee to St. Louis in late August. Though Axford has two years of arbitration eligibility remaining, it seems rather likely that he will be a non-tender candidate once again. As with Ernesto Frieri, who was recently acquired and later outrighted by the Pirates, early-career save opportunities make it difficult to justify tendering contracts to non-elite bullpen arms.

For the Bucs, Axford represents another attempt to shore up a pen that has failed to match last year’s unit, which was third in baseball with a collective 2.89 ERA. In 2014, the Pittsburgh relief corps has put up a negative fWAR tally and combined to allow 3.52 earned per nine.