Gregor Blanco won’t have to worry about arbitration again in his career, as the outfielder has signed a two-year contract that buys out his final two seasons of arbitration eligibility, the team officially announced on Thursday. 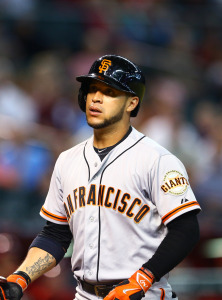 Blanco, a client of Octagon’s Jose Mijares, will reportedly earn $7.5MM over the life of the deal: $3.6MM in 2015 and $3.9MM in 2016. The 31-year-old had filed for a $4MM salary next year, with the team countering at $3.3MM, as documented in MLBTR’s Arbitration Tracker. The deal keeps him on track to reach free agency before the 2017 campaign.

Blanco seems likely to function as a fourth outfielder next year, now that San Francisco has signed Nori Aoki. But he obviously represents a key part of the club’s plans, especially given the injury history of center fielder Angel Pagan.

Blanco, who swings from the left side, has enjoyed a productive three-year run thus far with the Giants. Over that stretch, he has averaged 469 plate appearances annually while producing a league-average .257/.336/.355 slash. Though his defensive ratings took a step back last year, he has generally been valued as an above-average glove and two-to-three win player in a slightly less-than full-time role.