The Nationals look to have found a replacement for recently traded setup man Tyler Clippard, as the team announced on Monday the signing of right-hander Casey Janssen to a one-year contract with a mutual option. The ACES client will reportedly receive a $5MM guarantee in the form of a $3.5MM 2015 salary and a $1.5MM buyout on his $7MM mutual option. He can also reportedly earn up to $500K via performance bonuses. 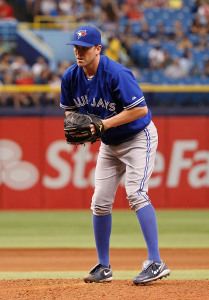 The 33-year-old Janssen was one of the best remaining options on the relief market and has spent the bulk of the past three seasons serving as Toronto’s closer. His stats took a tumble in 2014, though some of that decline may have been attributable to a violent case of food poisoning. Janssen reportedly lost eight pounds in a single day as a result of that episode, and he likely rushed back to the mound too soon; Janssen spent two days on an IV to rehydrate his body and the next day began a stretch of five appearances in eight days.

Overall, he posted a 6.26 ERA in the second half that caused his overall mark on the season to balloon to 3.94. Janssen showed his typically excellent command in 2014, walking just 1.4 hitters per nine innings, but his strikeout rate curiously dipped, even during his healthy first half. Janssen averaged just 5.5 K/9 in 2014 — a decline of three strikeouts per nine when compared to his previous four seasons of work.

A rocky 2014 notwithstanding, Janssen’s work dating back to the 2011 season is nothing short of outstanding when judged as a whole. In that time, he’s worked to a 2.77 ERA with 8.2 K/9, 1.9 BB/9 and a 43 percent ground-ball rate. He saved 83 games for Toronto in that stretch and should give Nationals manager Matt Williams an experienced safety net for closer Drew Storen. However, Storen posted a sensational 1.12 ERA in 2014 and took over the ninth inning late in the season after Rafael Soriano struggled. His ERA and the fact that he closed out the year with a stretch of 20 innings without allowing an earned run likely still makes Storen the favorite for saves in 2015.