The Mets will promote top pitching prospect Noah Syndergaard to start on Tuesday, GM Sandy Alderson told reporters today, including ESPNNewYork.com’s Adam Rubin (Twitter link). Righty Dillon Gee is headed to the DL with a groin strain, though the injury does not appear to be serious. 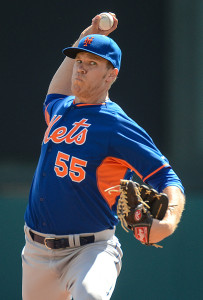 Syndergaard, 22, is widely regarded as one of the very best prospects in all of baseball. The towering righty came to New York along with backstop Travis d’Arnaud in the deal that sent R.A. Dickey to the Blue Jays.

Since that trade, Syndergaard has shot up prospect boards by continuing to show a huge fastball, solid control, and quality secondary offerings, as Baseball America explained in rating him New York’s best minor league arm coming into the year. There is a clear industry consensus that Syndergaard is ready and able to be a quality big league pitcher: BA rated him the 11th best prospect in the game, with MLB.com (#10) and Baseball Prospectus (#9) concurring in the general assessment. Kiley McDaniel of Fangraphs is somewhat less bullish, but only slightly, as he rated Syndergaard just inside the top 20 while expressing some concern with the consistency of the youngster’s offspeed offerings.

Syndergaard has done nothing to tamper expectations so far in 2015. Over 29 2/3 frames at Triple-A Las Vegas, a tough place to pitch, he has a 1.82 ERA with 10.3 K/9 against 2.4 BB/9. That start to the year seems to answer any questions that might have cropped up after Syndergaard proved somewhat easier to score against than expected last year (4.60 ERA) in his first run at the highest level of the minors.

It remains to be seen, of course, whether Syndergaard will hold down a big league job this year. Certainly, the opportunity is there. While Gee has been as solid as usual, and the Mets have ample rotation depth even after losing Zack Wheeler for the year, the club’s strong 18-10 opening to the year only raises expectations and increases the importance of putting the best product possible on the field.

If Syndergaard is able to hold onto an active roster slot all season, he would set himself up for future Super Two qualification. But by keeping him down to start the year, the Mets would retain control over their prized young arm through 2021. Regardless of roster status, it is not likely that Syndergaard will spend the entire year putting up long outings at the big league level; he has yet to exceed 133 frames in a professional season, meaning the club will likely look to manage his innings.