Jun 13: The player to be named later is left-handed pitcher Brad Wieck, tweets Anthony DiComo of MLB.com. He’ll now head to the Padres. The southpaw was the Mets’ seventh round pick in the 2014 Rule 4 draft. He has a 3.21 ERA with 11.89 K/9 and 3.38 BB/9 in 56 Low-A innings. FanGraphs prospect analyst Kiley McDaniel says Wieck’s fastball works in the low 90’s. The 23-year-old could move quickly as a situational reliever.

Mar 30: The Mets announced that they have acquired left-handed reliever Alex Torres from the Padres in exchange for Minor League right-hander Cory Mazzoni and a player to be named later. 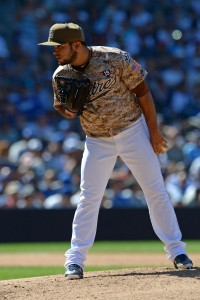 Torres, 27, will give the Mets a much-needed left-handed option in the bullpen. Josh Edgin, who had projected to be New York’s top southpaw reliever, underwent Tommy John surgery earlier this month, leaving the team precariously thin in this department. Since that time, rumors have circulated about potential matches for the Mets, who have been linked to Baltimore’s Brian Matusz as well as J.P. Howell, Paco Rodriguez and Adam Liberatore of the Dodgers. Colorado’s Rex Brothers was also suggested as a fit.

In Torres, New York receives a pitcher that has posted a 2.49 ERA with 9.1 K/9, 4.3 BB/9 and a 44.7 percent ground-ball rate over the past two seasons. Torres has benefited from a perhaps unsustainbly low homer-to-flyball ratio of just 3.1 percent, though Citi Field’s generally pitcher-friendly dimensions may help him to sustain an above-average rate in that regard.

Torres does come with some control issues, as he averaged 5.5 walks per nine innings pitched in 2014. That, combined with some correction for his good fortune on home runs, leads sabermetric ERA estimators to peg him for an ERA in the mid-3.00s rather than to sustain his sub-3.00 mark.

Somewhat curiously, most of Torres’ control problems come against left-handed hitters. Right-handers have batted a meager .175/.260/.251 against Torres dating back to 2013, while lefties have exploited his lack of control and gotten on base at a .341 clip against Torres. Of course, they’ve also batted just .213 and slugged .276, so if he can rein in his control, he could post dominant overall numbers.

With one year and 141 days of service time under his belt, Torres can be controlled via arbitration through the 2019 season. However, because he’ll end up with two years, 141 days next offseason (assuming a full year of service time is accrued, as one would expect), he’s a likely Super Two player, meaning he will be arbitration-eligible four times as opposed to three.

The 25-year-old Mazzoni was New York’s second-round pick back in 2011 and is generally ranked as the Mets’ 15th-20th best prospect, per Baseball America, MLB.com and Fangraphs. Mazzoni split the 2014 campaign across four levels, spending the bulk of his time at Triple-A where he worked to a 4.67 ERA with 49 strikeouts against just 12 walks in 52 innings. Mazzoni has spent much of his career as a starter, but most feel that he’s likely destined for relief work if he surfaces in the Majors, where his low 90s fastball will instead reach the mid-90s, serving as a complement to an above-average slider.

Ken Rosenthal of FOX Sports first reported (via Twitter) that the Mets had acquired Torres.