The Angels have acquired David DeJesus from the Rays just minutes after finalizing a deal to acquire David Murphy from the Indians, tweets Joel Sherman of the New York Post. Sherman had first tweeted that DeJesus was on the verge of being dealt, and Yahoo’s Tim Brown tweeted that the Angels were on the receiving end. The Rays have since announced that DeJesus has been traded to the Halos for right-hander Eduar Lopez. 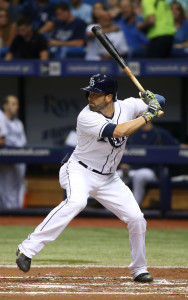 In DeJesus, the Angels have acquired a second veteran bat that handles right-handed pitching well but is limited to a platoon role. DeJesus has seen just nine plate appearances against lefties this year, but he’s been solid versus righties, hitting .263/.331/.384. For his career, DeJesus has slashed .285/.362/.441 when holding the platoon advantage.

In Lopez, the Rays have acquired a young right-hander that ranked 22nd among Angels prospects entering the 2015 campaign, per Baseball America. The 20-year-old Dominican hurler has spent the season in the Rookie-level Pioneer League, where he has posted a 4.32 ERA with a 33-to-16 K/BB ratio in eight starts (33 1/3 innings).

DeJesus is earning $5MM in 2015 and has a 2016 club option for the same rate that comes with a $1MM buyout. Of his 2015 salary, approximately $1.91MM remains. Coupled with the buyout, the Rays will save about $2.9MM on this deal. The trade will also create more at-bats in the season’s final months for John Jaso, whose return has limited DeJesus’ role with the club.

While Murphy and DeJesus have somewhat redundant skill sets, the Angels could use either at designated hitter on days when facing a right-handed pitcher. That calls into question Matt Joyce’s role with the team, as the free-agent-to-be and longtime platoon slugger has failed to produce anything close to his career norms in his lone season with the Angels. Joyce is currently on the 7-day disabled list, so there’s no need to take immediate action with his roster spot, but the presence of Murphy, DeJesus, Shane Victorino, Mike Trout and Kole Calhoun in the outfield plus C.J. Cron and Albert Pujols as first base/DH options seems to leave Joyce without much of a role on the club.