The Nationals will hire former Padres skipper Bud Black as their next manager, reports James Wagner of the Washington Post. The team has yet to confirm the move or make an official announcement, as Major League Baseball frowns upon teams announcing major news on the days that World Series games take place. Black was said to be one of two finalists, with former Giants/Cubs/Reds manager Dusty Baker the other reported name under consideration. 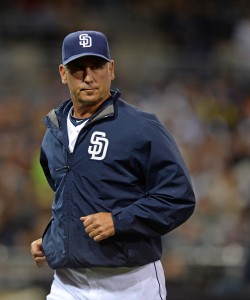 Black, 58, served as the Padres’ manager from 2007 until June of this past season, when he was fired. On the heels of a highly active offseason, the Padres entered the season with high expectations but failed to deliver the results that the front office and ownership had hoped to see. Black’s dismissal surprised many in the game, as he was among baseball’s longest-tenured and most respected managers. His time in San Diego represents Black’s only Major League managerial experience. He managed the team to a 649-713 record in that time, the Padres routinely dealt with payroll constraints that hampered the team’s ability to field competitive rosters. Prior to his time in San Diego, Black was the Angels’ pitching coach from 2000-06, where he won a World Series ring in 2002.

Black will replace the recently fired Matt Williams, who came to D.C. without prior managerial experience and often looked overmatched with in-game decisions such as bullpen usage. However, perhaps more troubling were the reported communication issues that developed between Williams and the Nationals’ roster over the course of the 2015 season. Barry Svrluga of the Washington Post wrote an extensive piece about rifts that formed between Williams and some of the team’s veteran players. Williams also appeared unaware of the extent to which a dugout altercation between Jonathan Papelbon and Bryce Harper escalated in the season’s final weeks. Given Black’s experience managing in the Majors, such communication issues and day-to-day problems don’t figure to arise under his watch.

Washington also dismissed its entire coaching staff following the season, so Black will be allowed to hand-pick each of the coaches who serve alongside him. As Wagner reports, Rick Renteria, who formerly managed the Cubs but served as Black’s bench coach in San Diego prior to that job, is an early favorite to serve as Black’s bench coach with the Nationals.