The Pirates have signed third baseman David Freese to a one-year deal, per a club announcement. The CAA client will earn $3MM on a straight guarantee without any available incentives, Rob Biertempfel of the Pittsburgh Tribune-Review reports on Twitter. Pittsburgh also announced that it has designated southpaw Jesse Biddle for assignment to create roster space. 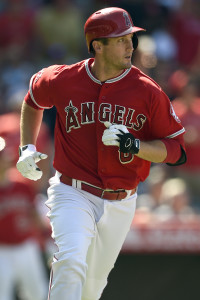 Freese, who’ll turn 33 at the end of April, has settled in as a steady but unspectacular performer at the hot corner. After some strong offensive years earlier in his career with the Cardinals, he’s generally posted slightly above-average results. All told, Freese slashed a sturdy .258/.322/.401 with 24 home runs in 981 plate appearances over his two years with the Angels, who reportedly considered a qualifying offer this winter but ultimately allowed Freese to leave uninhibited. Though his line-drive and hard-contact rates both fell last year, with his walk rate continuing to trickle downward, Freese did still manage to significantly increase his ISO in 2015 as against his prior year’s work.

Much the same holds on the defensive side of the equation, as Freese has generally graded out as roughly average with the glove before and since a one-year downturn (2013, his final year in St. Louis). He is a poor overall baserunner and has had his share of injury troubles, though it’s hard to blame him for missing time recently after being struck by pitches.

It took some time for his market to thaw, but Freese will presumably step right into Pittsburgh’s Opening Day lineup. Though the team has Jung Ho Kang and Josh Harrison under contract as options at second and third, Kang has only just reached the point of straight-line running after suffering a serious leg injury last year. Indications were that Kang may be available within a month or so of the season’s start, but Pittsburgh obviously decided there was enough uncertainty to make another addition.

Even when Kang does make it back, it’s not hard to see the value of bringing in the respected veteran. It’s expected that Freese will eventually form the right-handed side of a first base platoon with John Jaso, Stephen Nesbitt of the Pittsburgh Post-Gazette tweets. He’ll also deepen the overall infield unit. Harrison took a step back in 2015, as did shortstop Jordy Mercer, and the other options on hand (glove-first shortstop Pedro Florimon, prospect Alen Hanson, utilityman Sean Rodriguez) all come with their share of questions and uncertainties.

Nevertheless, the move comes as a bit of a surprise, though MLBTR’s Steve Adams did name the Bucs as one of only six teams that made much sense as a destination for Freese as of mid-February. It is a bit unclear what Pittsburgh will do with Rodriguez and, especially, Michael Morse with Freese now under contract. The former is owed $2.5MM this year after re-signing, while the latter is largely a free-roll after he was swapped for another bad contract (Jose Tabata) last summer. Those two could still conceivably see time in the outfield, but there probably won’t be many plate appearances available there. Adding Freese also seemingly tamps down the likelihood of an early promotion for first base prospect Josh Bell.

As for Biddle, who was acquired in a DFA limbo swap earlier in the winter, Pittsburgh may be hoping tha the can clear waivers at this stage of the offseason. The one-time top prospect will be returning from Tommy John surgery and has had serious control problems, but remains an interesting project for whatever organization ends up with his rights.