The Cubs have long been tied to left-handed relief help, and they landed just such an asset today (although not one that many expected), announcing that the acquisition of Mike Montgomery and minor league right-hander Jordan Pries from the Mariners. In exchange, the Cubs are sending Triple-A first baseman Dan Vogelbach and Double-A right-hander Paul Blackburn to Seattle. 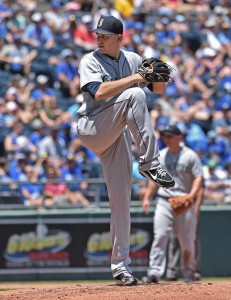 Long rated as a top prospect in the Royals’ farm system, Montgomery went to Tampa Bay in the Wade Davis/Wil Myers/Jake Odorizzi/James Shields blockbuster and was ultimately flipped to Seattle last year for right-hander Erasmo Ramirez. The Cubs will have control of Montgomery for another five seasons beyond the 2016 campaign, so this is far from a short-term pickup for president of baseball operations Theo Epstein and GM Jed Hoyer. 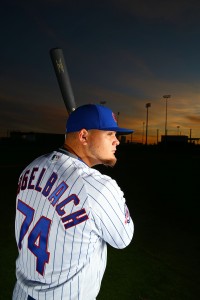 Of course, the same long-term caveats hold true for Mariners GM Jerry Dipoto, who will acquire a long highly touted minor league bat in the form of Vogelbach. The 23-year-old Vogelbach is a former second-round pick of the Cubs that has mashed at virtually every minor league stop he’s made. However, as a player that is strictly limited to first base or designated hitter — Vogelbach’s 6’0″, 250-pound frame wouldn’t play elsewhere — there was no hope for Vogelbach to get to the Majors with the Cubs other than as a bench bat thanks to the presence of Anthony Rizzo.

The left-handed-hitting Vogelbach is currently batting an excellent .318/.425/.548 with 16 homers and 18 doubles through 365 plate appearances with Chicago’s Triple-A affiliate. That type of production has been standard for the slugger throughout his career in the minors, as he is the owner of a career .290/.389/.486 batting line as a professional. Vogelbach just missed the cut for the Cubs’ midseason Top 10 prospect list over at Baseball America, though BA noted that his stock is rising with a strong season a Triple-A and a strong work ethic to improve his defense at first base.

Blackburn, 22, was selected by Chicago with the 56th overall pick of the 2012 draft and rose to the Double-A level for the first time this season, where he’s logged a 3.17 ERA with 6.3 K/9 against 2.3 BB/9 in 102 1/3 innings (18 starts). In addition to limiting walks effectively, Blackburn has registered an impressive 57.1 percent ground-ball rate in his time at the Double-A level this season. BA rated him 19th among Cubs farmhands this past offseason, calling him a potential back-of-the-rotation starter with some durability issues following a bout of forearm soreness late last season. BA’s report notes three average or better offerings (fastball, curve, changeup) and strong command.

As for Pries, the Cubs will be acquiring a former 30th-round pick that ranked outside of the Mariners’ Top 30 prospects per both BA and MLB.com this winter. The 26-year-old has split this season between Double-A and Triple-A, working to a 4.93 ERA with 8.9 K/9 against 2.2 BB/9 in 20 games — 12 starts and eight relief appearances. Pries began the year in the ’pen but has since moved to the rotation and, excluding a disastrous nine-run meltdown in his first start of the year, he’s logged a 3.23 ERA with a 60-to-17 K/BB ratio in 64 innings dating back to May 21.

ESPN analyst Tim Kurkjian first reported, during a television broadcast, that the two clubs had a trade that was in advanced talks. Bob Dutton of the Tacoma News Tribune tweeted that a deal was in place, and Yahoo’s Jeff Passan reported (via Twitter) that Montgomery and Vogelbach were involved. Jon Morosi of FOX Sports and MLB.com tweeted that there were other players in the deal, and FOX’s Ken Rosenthal first reported Blackburn’s inclusion (links to Twitter). USA Today’s Bob Nightengale reported Pries as the fourth player (on Twitter).