The Pirates will promote top first base prospect Josh Bell to the Majors to make his big league debut tonight, according to multiple reports (Logan Stout first tweeted word of Bell’s promotion). 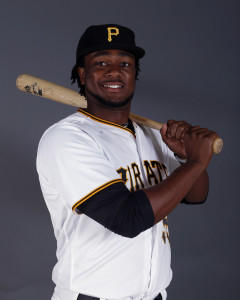 In Bell, the Pirates are promoting a player that ranks 38th on Baseball America’s just-updated Top 100 prospects list (published today). Jim Callis and Jonathan Mayo of MLB.com currently have Bell rated as the game’s No. 43 prospect. A 23-year-old switch-hitter that was selected 61st overall in the 2011 draft, Bell has had a monster season at Triple-A Indianapolis, slashing .324/.407/.535 with 13 homers, 19 doubles and four triples in 359 plate appearances. BA notes that Bell’s defense at first base is somewhat questionable — he just transitioned to the position in 2015 after previously playing right field — but both BA and MLB.com write that he could be a difference-maker at the plate and has middle-of-the-order potential. The 2016 season marks the first in which Bell has truly tapped into the power potential that led the Bucs to give him an over-slot bonus of $5MM back in 2011 when he slipped out of the first round due to signability concerns.

Bell’s promotion could mean that incumbent first baseman John Jaso will move into a bench role. Jaso, inked to a two-year, $8MM contract as a free agent this offseason, has provided his typical brand of steady production against right-handed pitching, but he’s limited to a strict platoon and is more good than great against righties (.285/.362/.413 this season). As Bell’s excellent Triple-A production (which recently landed him on Jason Martinez’s “Knocking Down the Door” series) indicates, he carries significantly higher upside at the plate. And, with an OPS north of .900 against both lefties and righties in Triple-A this season, Bell could be a long-term option that doesn’t require a platoon partner.

Bell becomes the latest top prospect to join the Pirates’ ranks, as they’ve promoted Top 100 mainstays Jameson Taillon and Tyler Glasnow this year and also called up highly regarded organizational prospects such as Chad Kuhl and Steven Brault to make their big league debuts. Even if he’s in the Majors to stay, Bell will accrue just 86 days of big league service time in 2016, which would leave him well shy of eventually achieving Super Two designation. If this promotion to the big leagues proves to be permanent, the Bucs will control Bell through the 2022 season and he won’t be arbitration eligible until the completion of the 2019 campaign.