The Tigers have announced a deal to acquire shortstop Erick Aybar from the Braves. Headed in return to Atlanta are infielder Mike Aviles and catcher Kade Scivicque. Detroit will receive cash in the deal, per David O’Brien of the Atlanta Journal-Constitution (via Twitter). Tigers GM Al Avila declined to discuss details, but did offer that “it’s pretty even” in terms of the salaries involved, MLB.com’s Jason Beck tweets. 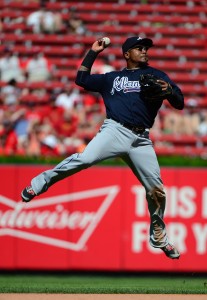 Detroit made the move with its two starters on the left side of the infield — shortstop Jose Iglesias and third baseman Nick Castellanos — currently parked on the DL. Adding Aybar will presumably provide an option at both positions, though he has played almost exclusively up the middle over his 11-year career.

Aybar, 32, was picked up by the Braves in last winter’s Andrelton Simmons deal. Presumably, the club hoped he’d provide a steady option that might turn into a trade chip, but it wasn’t always smooth sailing. After an abysmal start to the season and some injury issues, the veteran has actually been rather productive of late.

Things began to turn around in June, when Aybar slashed .302/.393/.396 upon his return from the DL. Though he dipped a bit in July, he is putting up a strong .333/.333/.519 batting line over 54 plate appearances thus far in August. The overall results aren’t pretty, and defensive metrics are also down on Aybar’s glovework, but Detroit is understandably focused on near-term performance in bolstering its roster for the stretch run. With Aybar set to hit the open market after the season, he’s a pure rental.

The Braves appear to have sent a fairly significant amount of cash to facilitate the swap. Aybar was earning $8.5MM this year, while Aviles is playing on a $2MM deal. With about $2.18MM still owed to the former and around $517K to go for the latter, Atlanta would have needed to send around $1.5MM to make up the difference.

It’s tough to view the inclusion of Aviles as much more than a salary-balancing tactic, though he’ll presumably bolster the infield depth and provide a veteran presence for the rebuilding Braves. He had been relied upon rather heavily by the Tigers in June and July, but generally hasn’t produced in his age-35 campaign. Overall, Aviles owns a .210/.258/.269 slash over 181 plate appearances.

The key to the deal from the Braves’ side is the addition of the 23-year-old Scivicque, who was taken in the fourth round of the 2015 draft. He has spent the entire year at the High-A level, posting a .282/.325/.380 batting line with six home runs. Still, he was recently rated the 20th-best prospect in a thin Tigers system by MLB.com, which credited his strong receiving skills while noting that he may not have enough bat to profile as more than a back-up in the majors.