The Blue Jays have announced a two-year, $12.5MM contract with first baseman/outfielder Steve Pearce. ESPN’s Buster Olney had reported earlier this morning that talks between the two side were gaining some traction. 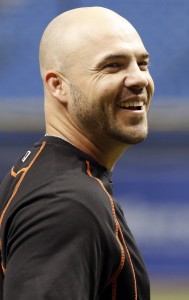 The 33-year-old Pearce will bring to Toronto a strong right-handed bat that can either share time with Justin Smoak at first base (though Smoak is a switch-hitter, he hits right-handed pitching better than lefties). Pearce’s lefty-mashing ways will complement Smoak’s skill set nicely, and he also has plenty of experience in the corner outfield, where the Jays are lacking options with both Michael Saunders and Jose Bautista hitting the open market. What the signing means for Edwin Encarnacion remains to be seen. Certainly, Toronto could view Pearce and Smoak as a serviceable combination at first base and shift focus to the corner outfield. As was the case with the addition of Kendrys Morales, this signing doesn’t seem to preclude a reunion, but it does appear to further diminish the likelihood of a deal.

Dating back to 2013, Pearce has slashed a robust .266/.348/.485 with an average of 27 homers per 162 games played. He’s been especially productive against southpaws in that time, batting .272/.359/.523 in 418 plate appearances. From a defensive standpoint, Pearce has more than 650 innings at both corner outfield spots and first base, and he’s also 242 innings at second base over the past two seasons with the Rays and Orioles. While Pearce may not contend for a Gold Glove anytime soon, his defense in both outfield corners and at first has graded out as average to slightly above average over the course of his career (per Defensive Runs Saved and Ultimate Zone Rating).

Pearce underwent forearm surgery back in September, but that procedure was said to come with a four- to six-month recovery timeline, suggesting that he should on track for Spring Training. That the Jays felt confident enough to offer two years would indicate that his rehab is progressing as planned. It’s a notable departure from last winter, when Pearce languished on the free agent market into late January before he took a one-year deal with the Rays.