DEC. 15: Milone will receive a $1.25MM base salary plus incentives, on his non-guaranteed deal, tweets ESPN’s Jerry Crasnick. He can earn up to $2MM if he maxes out the incentives package, Jon Heyman of Fan Rag tweets.

DEC. 14: The Brewers announced on Wednesday that they’ve signed left-hander Tommy Milone to a one-year, Major League contract. His addition gives the team a full 40-man roster, though Milone did not receive a fully guaranteed contract, tweets Tom Haudricourt of the Milwaukee Journal-Sentinel. 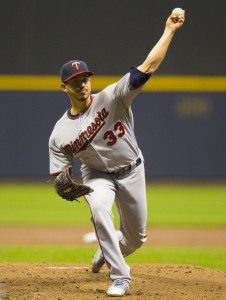 Milone, 30 in February, was arbitration eligible this offseason but was outrighted by the Twins back in mid-October, thus sending him to the free-agent market earlier than had been forecast. He had been projected by MLBTR contributor Matt Swartz to take home $4.9MM in arbitration — a slight raise on last year’s $4.5MM salary.

A soft-tossing lefty (~87.5 mph average fastball), Milone posted solid numbers with the Nats, A’s and Twins through the first four-plus seasons of his career, delivering a 3.97 ERA with 6.5 K/9 against 2.2 BB/9 in 619 innings (106 starts, four relief appearances). However, he limped to a 5.71 ERA in 69 1/3 innings with Minnesota last year. Milone’s strikeout and walk rates remained similar to his previous marks, and he actually posted a career-best 45.7 percent ground-ball rate last year, but he also became enormously homer-prone. More than 21 percent of the balls put in the air against Milone turned into home runs, and his hard-contact rate skyrocketed while his infield-fly rate dipped from 15 percent to five percent.

Milone joins an already crowded Brewers rotation picture that currently features Junior Guerra, Matt Garza, Wily Peralta, Chase Anderson, Zach Davies and Jimmy Nelson. It’s possible, of course, that one of those names is ultimately moved this offseason — Guerra has drawn trade interest, and the Brewers would undoubtedly love to shed some of Garza’s remaining contract — though the addition of Milone at what figures to be a low-cost rate doesn’t exactly guarantee that such a move is forthcoming.

Milone did spend time in both the bullpen and the rotation with the Twins last season, so perhaps the Brewers simply envision him occupying a swingman role and functioning as somewhat of a safety net if the team either incurs an injury or does find a taker for one of its current rotation options. He also gives the team a left-handed option in the rotation that wasn’t otherwise present, as each of the six aforementioned starters throws right-handed. Brewers general manager David Stearns told reporters, including MLB.com’s Adam McCalvy (Twitter link), that Milone will compete for a rotation spot in Spring Training.

With four years and 113 days of Major League service time under his belt, Milone also gives the Brewers an arm that can be controlled beyond the 2017 campaign. In the event of a rebound, Milone would still fall a good bit shy of reaching six total years of service time, meaning the Brewers can control him through the 2018 season by way of arbitration should he prove worthy of such a commitment with a bounceback campaign next year.