The Marlins have agreed to a two-year deal with free-agent righty Junichi Tazawa, according to Ken Rosenthal of FOX Sports (Twitter links). He’ll earn $12MM in the contract, per Rosenthal, with $5MM in the first year and $7MM coming in the second, according to SB Nation’s Chris Cotillo (via Twitter).

Tazawa, 30, has long carried strong strikeout-and-walk numbers, with a lifetime 8.9 K/9 against 2.0 BB/9, though he induces grounders on less than two of every five balls put in play against him. From 2012 through 2014, that steady backdrop allowed Tazawa to carry an excellent 2.62 ERA over 175 1/3 innings. 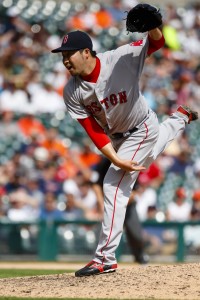 While the K/BB figures remained about the same over the ensuing two seasons, however, Tazawa has fallen off in the results department. Since the start of 2015, he has allowed 4.15 earned runs per nine. The main culprit in 2015, perhaps, was an elevated .349 batting average on balls in play against him. While that fell back to earth (.292) in 2016, Tazawa showed a new susceptibility to the long ball, allowing 1.63 homers per nine.

The Marlins could have a relative bargain on their hands if Tazawa’s earned-run dip is more fluke than fact. He was mostly dinged up last year in a six-appearance stretch in August, but finished strong and otherwise was much the same pitcher as usual. His average fastball velocity in 2016 (92.8 mph) was down slightly against prior years, but not drastically so (he had ranged between 92.2 and 93.9 over the prior four seasons). And Tazawa’s 13.0% swinging-strike rate was the second-best mark of his career.

Having missed on top-dollar closer Kenley Jansen, Miami will instead plug Tazawa — and, potentially, another as-yet-undetermined new acquisition — into the set-up corps. A solid unit is taking shape in front of presumptive closer A.J. Ramos, with Tazawa joining returning righties David Phelps and Kyle Barraclough, each of whom was excellent in 2016.

Of course, that’s not quite the potential super-pen that has been hypothesized as the Fish seemingly moved off of the idea of dealing for a high-quality starter, but there may be more yet to come from president of baseball operations Michael Hill and his staff. Having watched as former southpaw reliever Mike Dunn landed with the Rockies earlier today, it’s possible to imagine the Marlins turning their sights to the remaining market for lefty relievers.