11:45am: The Reds and Marlins have both announced the trade. Cincinnati has yet to announce a corresponding roster move, though they’ll need to make one shortly, as both Castillo and Brice are on the 40-man roster, pushing Cincinnati’s total to 41.

7:55am: The Marlins and Reds have reportedly agreed to a trade that will send right-hander Dan Straily from the Cincinnati to Miami in exchange for right-handed pitching prospects Luis Castillo and Austin Brice as well as outfield prospect Isaiah White. 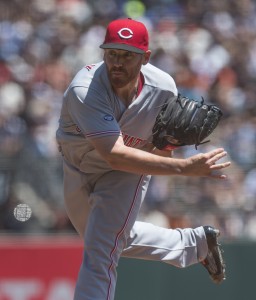 The trade represents a significant flip for the Reds, who acquired Straily free of cost when they claimed him off waivers from the Padres last spring. Cincinnati subsequently enjoyed a season in which Straily, who had bounced around the league following a promising 2012-13 debut with the A’s, logged 191 1/3 innings with a 3.76 ERA, 7.6 K/9, 3.4 BB/9 and a 32 percent ground-ball rate and reestablished himself as a Major League rotation piece.

Exactly how much of that strong season is repeatable remains up for debate; Straily has long been homer-prone and last year saw his fly-ball rate check in at 48 percent. A move to the much more spacious Marlins Park should help his cause, but he’ll also need to demonstrate that last season’s step forward in his control is sustainable. Straily’s BABIP was a lowly .239 as well, but fly-ball pitchers tend to maintain lower marks in that regard than their ground-ball counterparts, so the regression in that department may not be as sizable as one would assume upon first glance. (Straily’s career .255 BABIP in the Majors is considerably below the league average.)

The 28-year-old Straily finished out the year with two years, 126 days of Major League service time, meaning he fell just shy of Super Two designation. He’ll earn scarcely more than the league minimum this coming season and can be controlled by Miami for another four years in arbitration.

For the Reds, parting with Straily opens a spot in the rotation for one of the team’s many young arms. As it stands, Straily would’ve joined top starter Anthony DeSclafani, veteran Homer Bailey (if healthy) and left-hander Brandon Finnegan in Cincinnati’s starting five. A competition for the fifth spot in the deal would’ve likely included left-handers Cody Reed and Amir Garrett as well right-handers Robert Stephenson and Tim Adleman, though it’s now possible that two of those three could make the Opening Day rotation. Alternatively, the Reds could see the rotation vacancy as an opening to add a veteran arm that can provide some stability and leadership early in the season before possibly becoming a summer trade chip.

Straily joins a Marlins rotation that is also set to feature left-handers Wei-Yin Chen and Adam Conley, newly signed right-hander Edinson Volquez and longtime Marlins righty Tom Koehler. The addition of Straily seems likeliest to bump offseason signee Jeff Locke from the fifth slot in that rotation to the bullpen, which could have a trickle-down effect and bump an out-of-options player like Jose Urena off the roster.

Locke, however, would give Miami a much-needed southpaw option in the ’pen, as Miami previously stood to potentially deploy an all-right-handed relief corps. A.J. Ramos, Kyle Barraclough, David Phelps, Brad Ziegler, Junichi Tazawa and Dustin McGowan all seem like locks to open the season in manager Don Mattingly’s bullpen. The former three constituted an outstanding late-inning trio in 2016, while the latter trio all signed Major League contracts this winter.

The price Miami is paying to acquire Straily is a steep one. Castillo, 24, rates as their No. 2 prospect according to Baseball America and their No. 5 prospect according to MLB.com. The hard-throwing righty is said to have a fastball that can touch triple digits and sits in the upper 90s, and he’s fresh off an excellent season with Miami’s Class-A Advanced affiliate in the Florida State League (plus a brief Double-A appearance late in the year). Castillo posted a scintillating 2.07 ERA with 7.0 K/9 against just 1.4 BB/9 in 117 2/3 innings in High-A, and he kicked in another 14 innings of 3.86 ERA ball at Double-A for good measure.

BA praised Castillo’s “easy velocity” and “smooth delivery” in their offseason scouting report on him, noting that he’s made the jump from power bullpen arm to potential mid-rotation starter. Per their write-up, his slider projects as an above-average offering, and he’s working to develop a changeup that still needs some fine-tuning. The Marlins originally landed him in the trade that sent Casey McGehee to the Giants, and his stock has risen quite a bit since that time.

However, it’s also worth noting that this is the second time the Marlins have agreed to trade the right-hander. Castillo was originally one of the prospects that went from Miami to San Diego in the Andrew Cashner/Colin Rea trade, but the Marlins reacquired him from the Padres after Rea suffered a UCL tear in his first start as a member of the Marlins. That, of course, doesn’t necessarily indicate that the Marlins have soured on him in any way, but Miami knows more about him than any other organization and seems comfortable parting ways with Castillo so long as it nets them a long-term rotation cog.

As for Brice, the 24-year-old gives the Reds an immediate, MLB-ready option to plug into their bullpen if he shows well in Spring Training. Brice made his Major League debut in 2016, and while he struggled to the tune of 11 earned runs in 14 innings, he also allowed only nine hits against five walks with 14 strikeouts. Add to that a composite 2.74 ERA in 102 minor league innings (93 1/3 frames at Double-A plus 8 2/3 in Triple-A), and there’s a chance that Brice could open the year in Cincinnati’s bullpen.

MLB.com’s Jonathan Mayo and Jim Callis rank Brice ninth among Miami farmhands, noting that he looked to improve upon his longstanding control problems in 2016. Per MLB.com’s free scouting report, he throws a “heavy” fastball in the low to mid 90s and boasts an above-average slider that was newly added to his repertoire. Their report notes that Brice does still have some upside as a potential starter but adds that he could have a quicker impact as a two-pitch reliever that can dominate same-handed opponents.

White, meanwhile, ranks 15th on MLB.com’s list of top 30 Marlins prospects. The 2015 third-rounder spent last season with Miami’s short-season Class-A affiliate, hitting .214/.306/.301 in 51 games and 201 plate appearances. While those numbers clearly aren’t eye-catching, Callis and Mayo call him a plus-plus runner (70-grade speed on the 20-80 scale) with the potential to be a premium defender in center field. White only just turned 20 years of age and is less than two calendar years removed from playing in high school, so he’s raw and represents something of a wild card for the Reds at this point. However, that’s not a bad third piece to add to a pair of more established arms that could conceivably impact the Cincinnati pitching staff within the next two years.

Jeff Passan of Yahoo Sports first reported that a Straily trade was close, adding that Castillo and Brice were involved (via Twitter). Jon Heyman of FanRag Sports tweeted that a deal was in place, pending medical reviews. Jim Bowden of ESPN and MLB Network Radio on SiriusXM reported that White was the third prospect in the deal (Twitter link).