The Brewers bolstered their bullpen on Thursday, announcing the signing of right-hander Neftali Feliz to a one-year contract. Feliz, a client of BTI sports, is reportedly expected to close for Milwaukee and will be guaranteed $5.35MM. His contract reportedly contains incentives as well, which can boost the value of the deal to $6.85MM.

The 28-year-old Feliz was the 2010 American League Rookie of the Year with the Rangers and served as the closer in Texas for two seasons before shifting back to the rotation and ultimately requiring Tommy John surgery in 2013. He returned to Texas and logged a 1.99 ERA in 2014 but with considerably diminished peripherals. The Rangers cut him loose midway through the 2015 campaign after 19 2/3 innings of a 4.58 ERA, and he fared worse down the stretch with the Tigers that season (7.62 ERA in 28 1/3 innings). 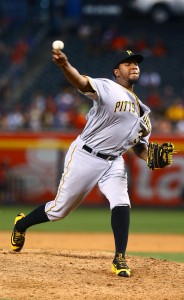 Like so many others, though, Feliz found renewed success with the Pirates, for whom he tossed 53 1/3 innings of 3.52 ERA ball last season. His fastball velocity, which had been diminished since coming back from Tommy John, spiked back up to an average of 96.1 mph, and his strikeout and swinging-strike rates jumped accordingly. Feliz averaged 10.2 K/9 last season and posted a career-best 14.2 swinging-strike rate that ranked 24th among 135 qualified relievers. He also averaged a manageable 3.5 walks per nine innings pitched and posted a 37.9 percent ground-ball rate.

Had Feliz finished the season in better health, a multi-year deal may very well have been in the cards. However, his season unofficially came to an end on Sept. 3 with an arm injury that was never disclosed in full and remains nebulous to this day. That likely gave plenty of teams pause over the course of the winter, though the Brewers are comfortable enough with his medicals to bring him on board. The fact that Milwaukee has a seemingly wide-open ninth-inning picture following the trade of Tyler Thornburg to the Red Sox likely enhanced the appeal of the Brewers for Feliz, who can re-enter the open market next season and conceivably cash in on a substantial contract if he remains healthy in 2017.

If Feliz does ultimately end up closing games in Milwaukee, he’ll push right-handers Corey Knebel and Carlos Torres down the pecking order. Rob Scahill, Michael Blazek, Jhan Marinez, Jacob Barnes and Taylor Jungmann will be among the relievers competing for middle relief work in manager Craig Counsell’s bullpen, and left-hander Tommy Milone looks like a solid bet to break camp as the team’s long man (if he’s not able to claim a rotation spot in Spring Training).

Jeff Passan of Yahoo Sports first reported the agreement and the terms (Twitter links). FanRag’s Jon Heyman said the two sides were nearing a deal over the weekend after BrewerFan.net’s Jim Goulart linked to the two sides.