SUNDAY: The Padres have announced Weaver’s signing. To make room for Weaver, the club has placed righty Colin Rea on the 60-day disabled list. Rea underwent Tommy John surgery in November and won’t pitch this year.

SATURDAY: The Padres have agreed to terms with veteran righty Jered Weaver to a one-year deal, Fan Rag’s Jon Heyman tweets. USA Today’s Bob Nightengale was the first to tweet a deal was close. Weaver will receive $3MM, as Heyman tweets and SB Nation’s Chris Cotillo confirms. Weaver can also receive a $250K assignment bonus. Weaver is a client of the Boras Corporation. 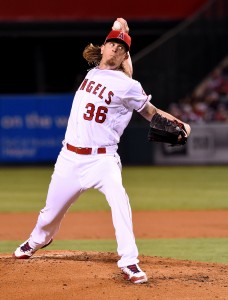 The Padres were repeatedly connected to Weaver this winter as the team aimed to remake its rotation. After parting ways with Andrew Cashner and James Shields in trades last season and then non-tendering Tyson Ross, the Padres’ starting pitching corps looked extremely thin. The team has since added veterans Jhoulys Chacin, Clayton Richard and Trevor Cahill to eat innings, and it appears Weaver will be another arm to add to that mix.

Weaver has pitched his entire career to this point a short drive up Interstate 5 in Anaheim, and his new deal with the Padres allows the Southern California native to stay in familiar environs. The 34-year-old has generally been a reliable workhorse throughout his career, but he’s undergone a long decline in the past several seasons that culminated in a very disappointing 2016 in which he posted a 5.06 ERA, 5.2 K/9 and 2.6 BB/9 while averaging just 83 MPH with his fastball. ERA estimators suggested he was even worse than that 5.06 ERA suggested, with a 5.64 xFIP and 5.44 SIERA. His ground ball rate also continued to drop to just 28.8%, and he led the AL in home runs allowed, with 37. A big-league deal for him is a small coup for Boras at this point.

Even as Weaver’s velocity and strikeout rate have diminished in recent years, however, he still managed to pitch 178 innings last season, and his ability to take the ball has value. He could be an asset for a Padres staff that could struggle to get through games in 2017.