The Giants announced that they’ve acquired right-hander Sam Dyson and cash from the Rangers in exchange for a player to be named later. It’s not yet known exactly how much of Dyson’s $3.52MM salary the Rangers are including in the deal, though Dyson is still owed about $2.27MM of that figure. The deal was technically announced as Dyson and cash for a player to be named later or cash, though Evan Grant of the Dallas Morning News writes that the Rangers expect to acquire a minor leaguer in exchange for Dyson. Madison Bumgarner was moved to the 60-day DL to clear a spot for Dyson on the 40-man roster. 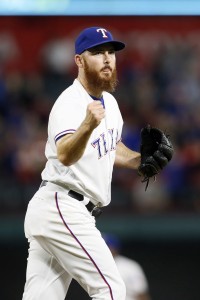 Dyson, 29, was designated for assignment by Texas last week after an awful start to the 2017 campaign. The Rangers, though, reportedly expected to find a trade partner for the change-of-scenery candidate right off the bat after gauging interest in him prior to the DFA.

Dyson’s fall in Texas was remarkably quick, as just one year ago he served as a lockdown closer for manager Jeff Banister. In 70 1/3 innings, Dyson saved 38 games and posted a 2.43 ERA with 7.0 K/9 and 2.0 BB/9. His heavy sinker also generated a 65.2 percent ground-ball rate and averaged a healthy 95.3 mph during that excellent ’16 season.

The 2017 campaign, though, has essentially been the antithesis of that terrific year for Dyson; through 16 2/3 innings, he’s posted a 10.80 ERA with more walks (12) than strikeouts (seven). Dyson has also yielded six home runs through his mere 16 2/3 frames this year — one more homer than he surrendered across last season’s 70 1/3 innings.

The Giants themselves have gotten off to a rough start, entering play today with a 24-35 record. San Francisco’s setup corps took a hit before the season ever started with the news that left-hander Will Smith required Tommy John surgery. Manager Bruce Bochy’s bullpen has pitched to a collective 3.96 ERA, which ranks 14th in the Majors. Dyson joins a bullpen that already skews a bit right-handed, slotting in behind Mark Melancon, Derek Law, Hunter Strickland and George Kontos.