July 27: The Nationals are officially terming Strasburg’s injury as a nerve impingement in his right elbow, per this morning’s announcement of Strasburg’s DL placement. Left-hander Sammy Solis has been recalled to give the bullpen some extra depth for the time being, while Fedde is slated to start in place of Strasburg on Saturday.

July 26, 9:36pm: Manager Dusty Baker confirmed after the game that Fedde is coming up and that Strasburg will be placed on the 10-day disabled list (Twitter link via Chelsea Janes of the Washington Post). The skipper was “adamant” that Strasburg will only miss one start, Janes adds. 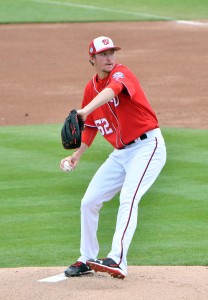 Fedde, 24, was Washington’s first-round selection in the 2014 draft. The Nats made him the No. 18 overall pick that season despite the fact that he had Tommy John surgery not long before the draft. He’s spent most of his career in the minors as a starter but was briefly moved to a relief role in part to limit his innings but also given the potential for a midseason promotion to help a struggling Nationals relief corps.

The Nationals recently moved Fedde back to a rotation role, and while he was torched for six runs without recording an out in his initial return to the rotation, he’s allowed just three runs on 10 hits and no walks with eight strikeouts in his past 11 2/3 frames. Overall, he’s worked to a 3.72 ERA with 8.0 K/9 against 2.4 BB/9 with well above-average ground-ball tendencies in 77 1/3 innings between Double-A Harrisburg and Triple-A Syracuse this season.

Fedde dropped out of the top 100 on MLB.com’s midseason rankings, but Jim Callis and Jonathan Mayo still rank him third among Washington farmhands. Their report notes that he sits 91-94 mph with his fastball and can run his velocity a bit higher when needed. He pairs that with a plus slider, average changeup and above-average control, giving him a third starter’s ceiling, per Callis and Mayo.

While this seems like it could very well be a spot start for Strasburg, whose injury isn’t believed to be serious, there’s an obvious opening at the back of the Washington rotation as well. Joe Ross underwent Tommy John surgery earlier this month, and the Nats have since relied on veteran Edwin Jackson to make a pair of starts. Jackson has been serviceable in those two outings, but Jackson struggled with the Orioles earlier this season and hasn’t enjoyed big league success as a starting pitcher since 2012 (his last run with the Nationals).