12:10pm: The two teams have announced the trade.

11:15am: The Padres look to have found their shortstop for the 2018 season, as they’ve reportedly reached a tentative agreement to acquire switch-hitting Freddy Galvis from the Phillies in exchange for minor league right-hander Enyel De Los Santos. The teams have yet to announce the trade. 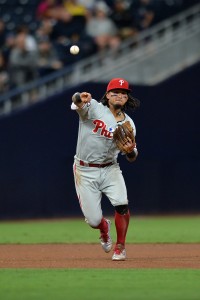 Galvis, who turned 28 last month, is a free agent following the 2018 season but will provide the Padres with a strong defender to serve as stopgap while ballhyhooed prospect Fernando Tatis Jr. continues developing in Triple-A El Paso. It’s been suggested in the past that Tatis could debut late in the 2018 season, so a one-year placeholder may be all the Friars truly need at the position. MLBTR contributor Matt Swartz projects Galvis to earn $7.4MM in 2018 after his final trip through the arbitration process.

In Galvis, they’ll acquire an OBP-challenged defensive specialist that has significantly increased his power output over the past two seasons. Galvis hit a combined 20 homer from his rookie season in 2012 through the end of the 2015 campaign. However, he popped 20 long balls in 2016 and 12 this past season while batting a collective .248/.292/.390 in those two seasons.

For the Phillies, Galvis was on the verge of becoming expendable with top infield prospects J.P. Crawford and Scott Kingery on the cusp of MLB readiness. Dealing him to San Diego will allow the Phils to deploy Crawford at shortstop from the get-go in 2018, assuming he looks ready to be tested against MLB pitching on a full-time basis in Spring Training. He’ll line up between Maikel Franco at third base and Cesar Hernandez at second base, assuming Hernandez (another trade candidate) isn’t moved prior to Opening Day as well. That trio will be joined by breakout slugger Rhys Hoskins at first base.

De Los Santos, who will turn 21 on Dec. 25, was the 13th-ranked prospect in a strong Padres system, per Jim Callis and Jonathan Mayo of MLB.com. He fell shy of Baseball America’s offseason list of the Padres’ top 10 prospects, though BA’s Kyle Glaser tweets that De Los Santos would be a top 10 name in many systems throughout the league. Glaser tweets that De Los Santos sits 94-98 mph with a heater that he commands to both sides in the lower portion of the strike zone. Callis and Mayo note that he already has an average curveball and a changeup that flashes above-average at times.

The 2017 season was a strong one for De Los Santos, who logged 150 innings over the life of 26 appearances (24 starts) and averaged 8.3 K/9 against 2.9 BB/9 with a 44.2 percent ground-ball rate en route to a 3.78 ERA. It’s not clear where the Phils intend to start him in 2018, but he’ll likely either return to Double-A and be in line for a quick bump to Triple-A early in the season or just open the year in Triple-A right out of the gate.