The Angels will promote top prospect Jaime Barria to make his Major League debut in a start against the Rangers on Wednesday, reports Jeff Fletcher of the Orange County Register (Twitter link). 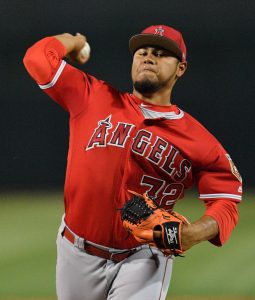 Barria, 21, entered the season rated by ESPN’s Keith Law as the game’s No. 62 overall prospect (subscription link). The Panamanian-born righty is already on the Angels’ 40-man roster, so the team will only need to make a 25-man roster move to bring him up to the big leagues.

It’s been a quick rise through the minors for Barria, who opened the 2017 season in Class-A Advanced but ascended to Triple-A and finished out the year with a combined 2.80 ERA, 7.4 K/9 and 2.0 BB/9 through 141 2/3 innings. The 6’1″, 210-pound righty has been an extreme fly-ball pitcher in his minor league tenure, with last year’s fly-ball rates ranging from 48.1 percent in Class-A Advanced (65 1/3 innings) to 58.5 percent in Triple-A (14 2/3 innings). Law’s report describes Barria as a three-pitch, command-and-control oriented starter who lacks a true plus pitch but comes with a high floor as a fourth starter (with the potential to develop into more).

Barria’s promotion was largely necessitated by injuries to Angels starters Andrew Heaney, Matt Shoemaker and J.C. Ramirez. The start likely would’ve gone to Parker Bridwell, though he needs to spend at least 10 days in the minors after being optioned on the heels of his April 6 start for the Halos. As for Heaney (who is nearing a return) and Nick Tropeano, Fletcher tweets that that duo could be in line to start on Thursday and Friday for the Angels.

It’s not clear if he’ll remain in the big leagues beyond his initial start, though it seems likely that the Halos will option Barria back to the minors at some point. If Barria were to stick in the Majors for good beyond Wednesday’s promotion, he’d accrue just enough service time to qualify for free agency following the 2023 season. A bit more additional minor league time, however, would delay his path to free agency until the end of the 2024 campaign.