1:54pm: The Padres will pick up approximately $7.5MM of Hughes’ contract, Mark Feinsand of MLB.com tweets.

1:05pm: The Padres have acquired right-hander Phil Hughes, cash and the 74th pick in June’s draft from the Twins for young catcher Janigson Villalobos, per announcements from both teams. 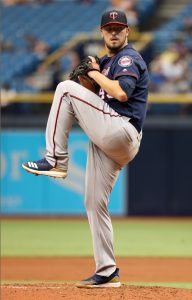 The Twins designated Hughes for assignment earlier this week, even though they still owed him the rest of his $13.2MM salary this year and another $13.2MM in 2019. Now, Minnesota will eat the remainder of Hughes’ salary this year, but San Diego will pay nearly half the tab next season, AJ Cassavell of MLB.com suggests.

In a best-case scenario for the rebuilding Padres, the 31-year-old Hughes would reemerge as a viable starter or reliever with the club. However, there doesn’t seem to be much hope on either front, given that Hughes has recently undergone two different surgeries to address thoracic outlet syndrome – which is often a death knell for pitchers. Those procedures ended each of Hughes’ previous two seasons prematurely, and have played a role in the bloated 5.99 ERA he has logged across 124 2/3 innings (33 appearances, 22 starts) since 2016.

While Hughes is certainly the eye-catching name in this trade, acquiring the pick in Competitive Balance Round B is the greater boon for San Diego. The Padres now have four of the draft’s top 85 choices, including Nos. 7 and 38, with which to add to an already deep farm system. The Friars’ newest selection carries a slot value of $812,200, and adding it will help make up for the pick they lost when they signed free-agent first baseman Eric Hosmer in the offseason.

Villalobos, a Venezuela native, immigrated to the United States when he signed a deal with the Padres in March 2016. He went on to post a .253/.408/.322 line in 233 plate appearances at the Rookie level from 2016-17, though the 21-year-old hasn’t played anywhere this season. He’ll suit up for the Rookie level Gulf Coast Twins when their season begins.