The Astros have officially struck a deal to acquire reliever Ryan Pressly from the Twins, as Ken Rosenthal and Robert Murray of The Athletic first reported (Twitter links). Prospects Jorge Alcala and Gilberto Celestino are going to Minnesota in the deal, as first mentioned by Jon Heyman of Fancred (via Twitter). 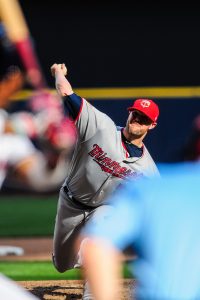 Better still, Pressly is earning just $1.6MM this year with another season of arbitration eligibility left to go. While the ’Stros were likely not overly concerned with cost, they obviously valued the additional season of control and surely were not unaware of the fact that it’ll come at a manageable price tag.

Just how things will shake out at the back of the Houston pen remains to be seen. For now, usual closer Ken Giles remains at Triple-A. Despite his increasingly interesting output, Pressly has not recorded any saves this year and only has eight holds. It seems likely, then, that Hector Rondon will remain the top option in the ninth, barring another move or a return to grace for Giles.

Despite his relative lack of late-inning experience, Pressly will represent another weapon for a relief unit that’s already among the best in baseball. Long noted for his impressive spin rate, Pressly has finally put it all together. This year, he’s sporting a dominant 17.9% swinging-strike rate while mixing a slider and curve off of his 96+ mph four-seamer. Much of the bump in the swing-and-miss has come from his slider, though the contact rate on that pitch has trended up over the course of the season.

While the Twins didn’t need to move Pressly, it seems the market interest was enough to force the club’s hand. Whether or not other non-rental assets will be parted with remains to be seen. Clearly, after previously moving Eduardo Escobar, there’ll be more moves to come. Infielder Brian Dozier and relievers Fernando Rodney and Zach Duke seem likeliest to end up on other rosters.

The team has picked up some interesting new assets to go with the youthful pieces added in the deal it completed earlier today. Alcala, who turns 23 tomorrow, is a pure flamethrower who’s still working to refine his secondary offerings. He has turned in 79 1/3 innings of 3.29 ERA ball with 9.3 K/9 and 4.0 BB/9 this year, splitting his time between High-A and Double-A, and graded as Houston’s tenth-best prospect on MLB.com’s most recent list. Celestino checked in at #15 on that ranking and was recently noted by Baseball America as the Astros’ top defensive outfield prospect. The 19-year-old has hit quite well this year at the low-A level, posting a .317/.383/.476 slash with four home runs.