The Diamondbacks have officially struck a deal with the Twins that sends infielder Eduardo Escobar to Arizona. Ken Rosenthal and Dan Hayes of The Athletic (Twitter link) reported an agreement was close, while Jon Heyman of Fancred tweets that there is in fact a deal in place.

In return, the Twins will get three Class A ballplayers in the deal, Jeff Passan of Yahoo Sports tweets. Righty Jhoan Duran and outfielders Ernie De La Trinidad and Gabriel Maciel are all going to Minnesota. John Gambadoro of Arizona Sports 98.7 had tweeted that a trio of minor-leaguers would go to the Twins in the deal. 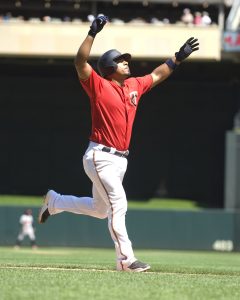 Escobar will reach free agency at season’s end, making him an obvious trade piece for the Twins. While the Minnesota club is still not fully buried in the AL Central, with a seven-game deficit, the club obviously determined that it was not close enough to the talented Indians to hold off on moving veteran assets.

With the deadline drawing near, Escobar arguably rated as the top infielder available. He is earning just $4.8MM this year, so his salary was rather easy to absorb for most contenders. Esobar sat at 18th on MLBTR’s recent listing of the top 75 trade deadline candidates, though he would have been significantly higher had it been clear that the Twins were ready to deal.

Even with Escobar leaving the market, there still remain quite a few other potential infield targets. Top rentals include now-former teammate Brian Dozier (who is likely limited to second base), Asdrubal Cabrera, Adrian Beltre, Ian Kinsler, and a group of veteran shortstops (Adeiny Hechavarria, Jose Iglesias, Freddy Galvis).

For the time being, at least, it seems likely that Escobar will slot in at third base, which is where he has spent most of the year. D-Backs incumbent Jake Lamb is dealing with a shoulder injury that may require a DL stint. He has also struggled mightily at the plate this year after two consecutive quality campaigns.

Escobar certainly has not had any difficulties putting bat to ball in 2018. He’s sporting a career-best .274/.338/.514 batting line with 15 home runs through 408 plate appearances. That’s a fair sight more than the switch-hitter has ever produced at the plate over a full season in the past, though Escobar has posted roughly league-average batting lines in three of the past four campaigns.

Of course, the Diamondbacks will surely still hope that Lamb can return and provide a boost. It’s notable, then, that Escobar has extensive experience at shortstop and also has spent time at second base (as well as the corner outfield). He may ultimately end up moving around the diamond as needs dictate down the stretch.

On the Twins’ side, there’s some interesting young talent coming back. Per MLB.com’s recently updated organizational rankings, Maciel ranked as the 11th-best prospect in the Arizona system, with Duran listed in the 19th spot. Maciel is valued for his ability to get aboard and do damage on the basepaths when he does. Entering the season, Baseball America rated both of those players among the thirty best Diamondbacks prospects. In their latest look, they bumped Duran into the club’s top-ten list on the basis of his big heater and “power curve.” While he still needs a third pitch to profile as a future starter, it seems there’s a lot to like about his arm.