The Cubs have acquired right-hander Jesse Chavez from the Rangers, as Ken Rosenthal of The Athletic first reported (via Twitter). Lefty Tyler Thomas is heading to the Rangers in return. 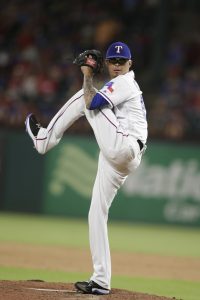 Chavez, 34, is owed $1.5MM on the season under his one-year deal. (That includes an additional $500K over the base $1MM guarantee that was tacked on when he made the active roster to open the season.) While he has flown under the radar on a Rangers club that’s mired in last place, Chavez earned a reasonably lofty placement (#38) on MLBTR’s recent ranking of the 75 top summer trade candidates.

Much of the appeal in Chavez lies in his ability to function as a swingman. He has alternated between relief and rotation work over the past several seasons, generally providing useful innings in either capacity. While he’ll surely be asked to join the relief corps in Chicago, Chavez will also help pad the club’s rotation depth.

Notably, Chavez’s velocity has trended up by over a full tick (to 93.1 mph with his average fastball) after fading somewhat last year. He’s also generating an 11.0% swinging-strike rate that’s near his personal best. Chavez has, however, allowed a few too many home runs for three years running.

For their minimal investment in Chavez, the Rangers seem to have done reasonably well to pick up Thomas. The 22-year-old was a 2017 seventh-round pick out of Fresno State. He has thrown well this year at the Class A level, turning in 75 innings of 2.88 ERA ball with 9.7 K/9 against 1.7 BB/9.