The Dodgers have struck a deal to acquire righty John Axford from the Blue Jays, according to Ben Nicholson-Smith of Sportsnet.ca (via Twitter). Righty Corey Copping will go to Toronto in return, per MLB.com’s Mark Feinsand (via Twitter). 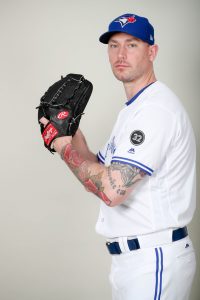 Axford, 35, has a 4.41 ERA, 8.8 K/9, 3.5 BB/9, 1.06 HR/9, and 53.3% groundball rate in 51 innings this year for the Blue Jays.  Axford had signed a minor league deal with the Blue Jays in February after a rough final season in Oakland that included over a month on the shelf with a shoulder strain.  He reinforces a Dodgers pen that has been relying on Kenley Jansen, Scott Alexander, and Daniel Hudson in the late innings, with Pedro Baez coming off the DL about a week ago.  Josh Fields and Tony Cingrani are among those still on the DL.  The Dodgers made their biggest July splashes in the middle infield, with the earlier acquisition of Manny Machado as well as the pickup of Brian Dozier today.

As for the Blue Jays, they’ve shipped off Roberto Osuna, J.A. Happ, Aaron Loup, and Seunghwan Oh in addition to Axford as part of a month-long dismantling.  Copping, the return for Axford, is a 24-year-old righty who recently earned a promotion to Triple-A.